A ‘Dune’ sanded to dullness 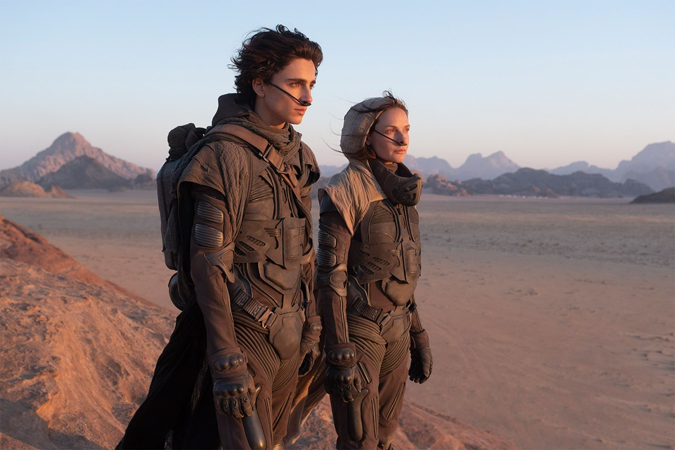 It’s surprising how cheesy the new “Dune” looks. Directed by Denis Villeneuve, the adaptation of Frank Herbert’s 1965 novel seems less like a CGI spectacle than a production still waiting for its backgrounds to be digitally filled in or its sets to be built.

David Lynch’s version of “Dune,” from 1984, was a profuse film, teeming with sets and costumes as intricate as they were overwhelming, making extended and startling use of optical effects, and, in general, displaying an urgent will to turn the fantasy worlds of the story, which is set in the year 10191, into physical and visceral experiences. Villeneuve’s interests appear to lie elsewhere. He puts the drama and plot first, avoiding details that could be distractions and appearances that aren’t explained in dialogue or action. The bareness with which he depicts the story doesn’t resemble the shoestring production values of nineteen-fifties sci-fi cheapies, but it instead suggests merely a failure of imagination, an inability to go beyond the ironclad dictates of a script and share with viewers the wonders and terrors of impossible worlds.

Like most fantasies and futuristic science-fiction movies, “Dune” requires a large amount of exposition to set up the rules of its universe. Lynch, in his “Dune,” hardly distinguishes exposition from drama, because he’s as interested in the what as in the why. His film establishes a phantasmagorical and nearly fetishistic relationship to the material world, to even apparently trivial objects as well as to gestures, phrases, inflections. He unifies his cinematic field, lavishing as much attention to detail-and as much time-on relatively undramatic scenes and background elements as on scenes of great moment. By contrast, Villeneuve appears embarrassed by the lengthy exposition that the story requires. Rather than revelling in it, he dispatches the necessary information hastily and dutifully, because he knows all too well where the film is going and why it’s going there. There’s a nexus of planets under the reign of a shadowy emperor, whose realm runs on a mineral known as spice. Both a hallucinogen and an energy source, spice is mined in the deserts of the planet Arrakis, which has been colonised for that purpose and, at the emperor’s orders, run by the evil House Harkonnen. But the emperor removes the Harkonnens from governing Arrakis and dispatches the benevolent House Atreides and its leader, Duke Leto Atreides, to take their place-along with his consort, Lady Jessica and their son, Paul. But the Harkonnens and their cruel leader, Baron Vladimir, aren’t giving up so easily and this seems to be all according to the emperor’s plan to lure the House Atreides to its destruction. 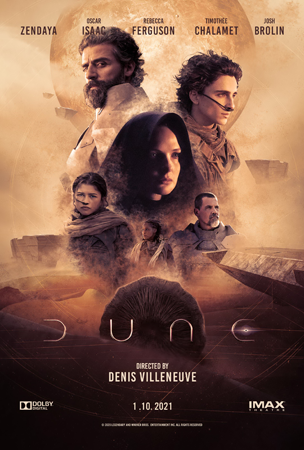 Arrakis is no empty desert. It’s inhabited by the Fremen, a people who have endured the spice colonies and survived by living underground in elaborate warrens, constructing advanced technology to sustain themselves in difficult conditions. The Harkonnens are ready to exterminate them, whereas the Atreidae want to make common cause with the Fremen and help them. Paul, young and untested, comes to believe that he is the Messiah, the so-called Kwisatz Haderach, whom a religious order of Atreides women, known as the Bene Gesserit, have been trying to breed, from generation to generation, and who will be the saviour for both the House Atreides and for the Fremen. What’s more, Paul’s dreams conveniently include, as a special enticement, anticipation of a Fremen woman named Chani, whom he will love.

Some films were made to be broadcast in several parts but nonetheless play seamlessly as a feature-Bruno Dumont’s “Li’l Quinquin,” for instance, which was made for French TV. The new “Dune,” which runs for two and a half hours, is a single film that plays like a collection of episodes in a series-which, in a way, it is, insofar as the movie ends with a cliffhanger, when Paul meets the Fremen and Chani says, “This is only the beginning.” The film includes very short scenes of terse dialogue that slot the story together piece by piece while hardly allowing for dramatic development, let alone the characters’ full perspective on the action. Lynch’s version includes “inner voices”-internal monologues, in voice-over, that, despite being brief, are vastly texture-enriching and deftly add a haunting dimension of subjectivity. Unsurprisingly, Lynch also makes ample and frenzied use of Paul’s dreams and other internal visions. In the new film, these visions are mere snippets and flashes, hints and approximations. Paul is put to a terrifying and mortal test by a Reverend Mother of the Bene Gesserit. But, whereas Lynch draws out both the agony of Paul and the specific details of the tortures that he endures, Villeneuve hastily dispatches the same scene and merely winks at Paul’s afflictions. Villeneuve makes “Dune” as if he were his own showrunner, following not the dictates of a domineering producer but his own mandate-to deliver a simplified coming-of-age story and emphasize the cautionary aspect of destructive colonial rapacity and even more destructive Messianic delusion. His images are as rigid and hermetic as the illustrations in a graphic novel. His point of view is without a second level, without physicality, without visceral impact, without an unconscious. The movie’s stripped-down material world correlates with a stripped-down emotional one-narrow, facile, and unambiguous.

The prime terror of life on Arrakis is the threat of attack from gigantic sandworms, which are said to grow up to four hundred and fifty metres long, and can swallow a huge harvesting rig in a single gulp. In Lynch’s film, their arrival is heralded by the eerie spectacle of short bolts of lightning sparking up from the sand. Villeneuve’s conception is monotonously literal-the sand bulges, and the maws of the creatures are shown in quick, devouring motion that’s closer to a disaster scene than to one of gargantuan body horror.

What’s most startling in this “Dune” is where the sense of directorial passion-of effort, of personal commitment-does go. What Villeneuve appears to savour most is knife duels, fiery explosions, knowing gazes and the pats on the shoulder that the young Paul gets from his father and his mentor, a warrior named Duncan. “Dune” ‘s cautionary tale of a would-be saviour reflects strangely back on the movie’s directorial psychology. Far from the excess, the hectic cruelty, and the extravagance of Lynch’s vision, Villeneuve’s is spare, austere, and almost saviour-like in its commitment to a coherent and worthy set of principles.

Perhaps the film’s very dullness, its withholding of visual and even dramatic pleasure, is Villeneuve’s version of virtue signalling.

The prime victims of this austerity are the movie’s actors. Villeneuve has assembled a terrific cast of more and less familiar performers, but he’s given them little time and little leeway. Because the pieces of the movie are calculated to fit together in unambiguous arrangements, the performances are reduced to ciphers. Chalamet, whose theatrical specificity is both an art and a liability, is onscreen for much of the film and yet reduced to a mask of his own appearance. Stuck with a script that denies his character variety and complexity, he delivers a performance that never gets to take shape. What he can do with the role in a second instalment may be the biggest cliffhanger of all.