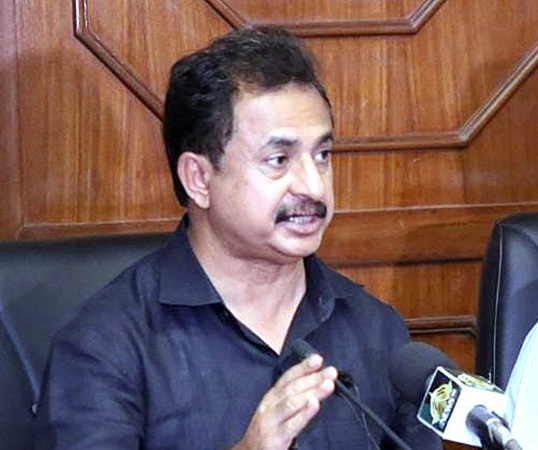 Addressing a joint press conference in Karachi at Sindh Assembly Building, they said that the PPP leadership was acting as vultures in Sindh that was plucking national exchequer, national resources and masses mercilessly.

Haleem Adil and Firdous Shamim said that on Prime Minister Imran Khan’s desire a magnificent assembly of Ulema, Mashaikh, custodians of revered shrines and lovers of the last prophet Hazrat Muhammad S.A.W was held at Sindh Governor House that was attended by over 1,500 participants.

Participation of scholars representing different schools of thoughts and theological orders was an appreciable and unprecedented demonstration of unity and harmony among Muslim Ummah, Haleem Adil said and expressed gratitude to all the religious scholars who attended the event.

The Opposition Leader in Sindh Assembly stated that PM Imran Khan believed that the entire nation was capable to transform Pakistan into Riyasat Madina by following the way of life and teachings of Khatim un Nabiyen S.A.W. “We, earlier, were of the opinion that only masajid can spread this message but now we believe that it was responsibility of entire Pakistani nation to inform the youth and students about Seerat-e-Nabvi S.A.W. and values of Islam.

Haleem noted that apex committee has decided that no highway would be blocked and later a case in the regard was also registered against leader of the opposition but PPP was doing the same unabated. In previous week they blocked National Highway in Hyderabad for more than five hours causing nuisance and hardship for thousands of citizens while the same act was repeated the other day at Dawood Chourangi in Karachi, he observed.

He said that CM Shah was not capable of heading apex committee as he failed to implement its decisions and a few thieves and robbers belonging to ruling PPP were at large and allowed to block roads at their whim. The Central Vice President of PTI lambasted Sindh CM Murad Ali Shah for using foul language against federal government in a public gathering and said that Bilawal Zardari, Murad Ali Shah and their cronies were vultures who were plucking the people of Sindh from 13 years.

People in Sindh did not have access to clean drinking water and better health facilities while they were being deprived of education, roads and other basic facilities, he noted adding that land grabbing was at its peak in the province and revenue record was being set ablaze to pave the way for illegal act of land grabbing.

Law and order situation was out of control and people of the province were left on mercy of outlaws, Haleem Adil alleged saying that a poor labouror was shot dead in broad daylight by snatchers in Karachi today.

The Opposition Leader in Sindh Assembly termed CM’s rhetoric as condemnable and said that intolerable language was being used against the great leader who was striving for development of Pakistan and working day and night to transform the Pakistan into a welfare state on the patron of Riyasat-e-Madina.

Speaking on the occasion, Firdous Shamim Naqvi took exception of CM Shah’s unethical language and stressed that such abusive language must not be used for a national hero. PTI had billion tree tsunami, remarkable economic growth, fundamental revenue reforms and unprecedented development on its credit; he said and asked what performance of PPP is during its 13 year regime in Sindh?

Imran Khan won world cup for Pakistan, made Shoukat Khanam Cancer Hospital realty and now taking the country forward on new vistas of progress, he said and asked that what name should be given to Bilawal and other PPP leadership who miserably failed to deliver during their 13-year long rule in the province?

The 50 year old slogan of ‘Roti, Kapra our Makan’ was awaiting its realization while PTI government was taking measures to provide shelter to masses, Naqvi said. BRT Red line and Orange line and Malir Expressway were still waiting for execution while 80 more buses of Green Line had arrived in the country, he observed.