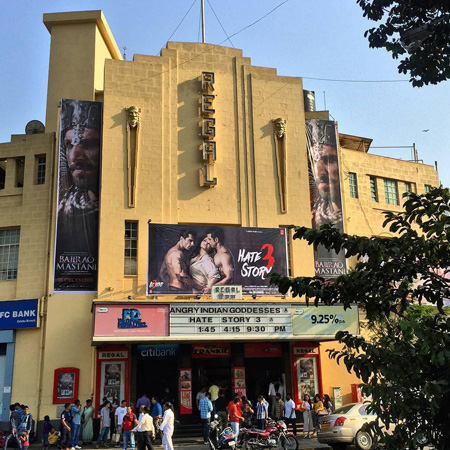 Cinemas began re-opening in movie-mad Mumbai on Friday, the home of Bollywood, with theatres in India’s tinseltown pinning their hopes on blockbuster releases from next month to pull back in the crowds.

The pandemic torpedoed the industry worldwide but films have a special place in Indian culture, with stars enjoying almost divine status and people often queuing to watch the same movie multiple times.

Lockdowns and a devastating surge in coronavirus cases in April and May kept Indians away from the silver screen, putting dozens of small cinemas out of business and squeezing production firms hard.

Many Indians turned instead to streaming platforms such as Netflix, which saw a boom in subscribers and hosted the releases of some new Bollywood films.

On Friday, only a few cinemas took advantage of being allowed to open, showing older pictures as well as the new James Bond and US superhero caper “Venom”, and punters were few and far between.

“I am an avid cinema enthusiast and I have been waiting for this day for a long time. The last movie I saw was in 2019, before the pandemic began. I am too excited to be back,” said Smer Sagar, 18, fresh from seeing “No Time to Die”.

The industry is hoping that a string of new big-budget flicks — some made months ago but unreleased — will bring back the good times.

The massive backlog will begin screening from Diwali weekend — the festival of lights in early November — with “Sooryavanshi” starring Akshay Kumar, one of Bollywood’s biggest stars.

Biryani banned: Bollywood, India’s Hindi-language film industry, was worth $2.5 billion in 2019 and is the world’s most prolific. Movies in other languages are also big business. Maharashtra state and its capital Mumbai are among the last to re-open theatres, multiplexes and auditoriums, but for the industry it is “very, very important”, film trade analyst Komal Nahta told AFP.

“Maharashtra contributes around 20 percent of the total all-India theatrical revenue and Bombay (Mumbai) is the nerve centre of Bollywood,” Nahta said.

Occupancy is being capped at 50 percent and no refreshments can be served, a far cry from pre-pandemic days when moviegoers at big multiplexes would be served biryani and ice cream in their seats.

Cinema-goers must wear face masks at all times, but while staff need to be fully vaccinated, there is no vaccination requirement for members of the audience.

“The effects of the pandemic will linger but we are hopeful that 2021 will bring back the theatre-going audience,” said Ajay Bijli, chairman of India’s largest cinema chain PVR. Nahta predicted audiences “will return with a vengeance and therefore we will see collections probably which will be beyond everybody’s imagination”.