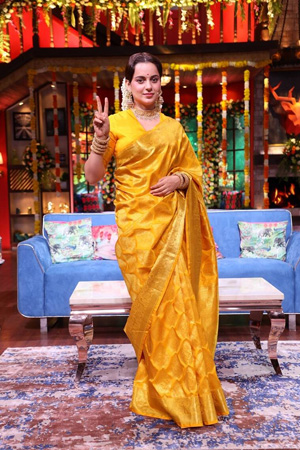 Actor-comedian Kiku Sharda who is known for pulling celebrities’ legs and is famous for his one-liners, recently cracked a joke on Kangana Ranaut on The Kapil Sharma Show.

Speaking to his guests on the show – Sonu Nigam, Hariharan and others, Kiku took a jibe at Kangana for her controversial statements against celebs.

Interrupting him, Kapil Sharma asks how can bangles be a witness in a court. To this, Kiku recalled one of Sonu’s popular songs ‘Bole Chudiya, Bole Kangana’ from 2001 blockbuster ‘Kabhi Khushi Kabhi Gam’ and said, “Now Kangana has already said a lot of things already,” cracking up the guests and the host.

It is to be noted that Kangana recently appeared on ‘The Kapil Sharma Show’ to promote her film ‘Thalaivii’.