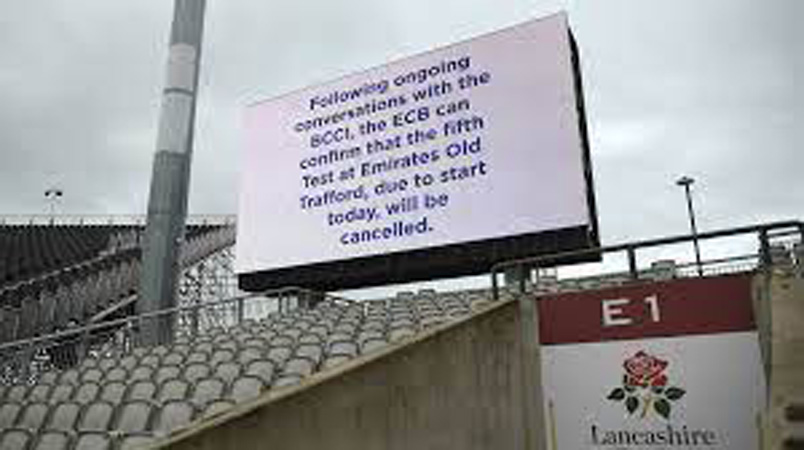 LONDON: England will play the coronavirus-delayed final match of their 2021 Test series against India in July next year at Edgbaston, the England and Wales Cricket Board announced on Friday. The match was due to take place last month at Old Trafford but the tourists said they were unable to field a team due to concerns about the spread of Covid-19 within their camp. Due to fixture complexities in next season’s English cricket schedule, the finale of the five-match series, which India lead 2-1, will now take place at Birmingham’s Edgbaston ground from July 1 following an agreement between the ECB and the Board of Control for Cricket in India (BCCI).

What promised to be a thrilling finish to this year’s series was abandoned just two hours before the scheduled start in Manchester. A reported positive virus test from assistant physiotherapist YogeshParmar appeared to be the final straw for an India squad already without head coach Ravi Shastri and two other backroom staff, who had all previously contracted Covid-19.

The abandonment was estimated to have cost English cricket up to £40 million ($55 million). There had been hopes the match might be restaged at Old Trafford but pre-planned events at the venue mean there will not be time to prepare a Test pitch. Instead, the fixture has been switched to Edgbaston, with the second Test between England and South Africa that had been due to be played at Warwickshire’s headquarters now being staged at Old Trafford from August 25, 2022.

‘Amicable solution’: The rescheduling of the match has had a knock-on effect on the scheduled Twenty20 series between England and India, with the white-ball matches now starting six days later than planned, on July 7 at Southampton. ECB chief executive Tom Harrison said: “We are very pleased that we have reached an agreement with BCCI to create a fitting end to what has been a brilliant series so far.” “We would like to apologise again to fans for the disruption and disappointment of September events. We know it was a day that so many had planned long in advance.” Coronavirus is an acceptable reason for cancelling a match under the regulations for the World Test Championship if it has a significant impact on a side fielding a team.

There had been concerns the International Cricket Council would have to adjudicate on the outcome of the match and series. But with England and India reaching what BCCI secretary Jay Shah said was an “amicable solution”, the global governing body has been spared the difficulty of resolving what could have been a divisive issue between two of its most powerful member nations. “I am delighted that the England-India Test series will now have its rightful conclusion,” added Shah. “The four Test matches were riveting, and we needed a fitting finale.”