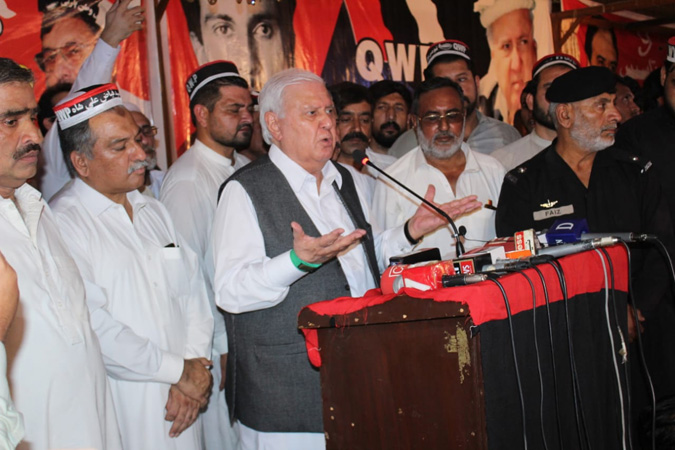 Qaumi Watan Party (QWP) Chairman Aftab Ahmad Khan Sherpao on Friday lambasted the federal government for being unable to give relief to the people in the face of rising inflation.

Addressing a at Gulbahar locality in Peshawar to mark the ninth foundation day of his party, he held the Pakistan Tehreek-e-Insaf (PTI) government responsible for the miseries being faced by the people.

“The recent increase in tariff of the petroleum products further pushed up inflation,” he remarked.

The hall, where the event took place, was packed to capacity. The venue for the public meeting was adorned with tri-colour party flags and banners carrying slogans.

A good number of QWP workers and leaders from all over the province participated in the event.

Continuing his tirade against the incompetent rulers, Aftab Sherpao said the time had come for the leadership of the political parties to lead protests against soaring price-hike to put pressure on the government to ease the difficulties of the people.

Quoting the findings of a recent survey conducted by the Pulse Consultants, he said 77 percent people felt that the economic policies of the incumbent government were headed in the wrong direction.

Lending all-out support to the Pakistan Democratic Movement, he said his party would also start staging protests from today to chide the rulers for failing to rein in inflation and mitigate the sufferings of the have-nota.

Demanding the prime minister to resign, he called for holding a free and fair election to allow the electorate to elect their true representatives to help address the challenges facing the country.

“This government has failed on all fronts. The country is under huge debt.

The economy is failing. The rupee is going down,” he noted with concern.

The PTI government, QWP leader maintained, lacked the vision and the ability to meet the challenges and overcome the crises.

“The country is limping from one crisis to another. There is no end to controversies,” he said, adding the government could not come up with a clear policy with regard to the developments taking place in Afghanistan. Fearing the resurgence of militancy, he urged the government to take corrective steps or else the situation could spin out of control.

He said the government would have to take tough decision to nip the evil in the bud.

Aftab Sherpao condemned the harassment of the journalist community and the bid to introduce the Pakistan Media Development Authority to stifle press freedom. He said the QWP would spare no effort to uphold democracy and help the oppressed get justice.

Meanwhile, the QWP workers led by Aftab Sherpao staged a protest against inflation by blocking the Grand Trunk Road near Gulbahar.