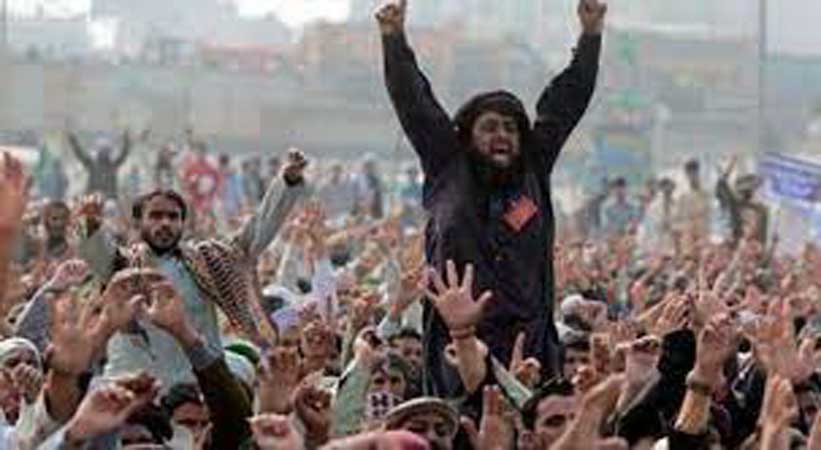 After days of staging protests in Lahore’s streets, the banned Tehreek-i-Labbaik Pakistan (TLP) announced on Thursday that it will start a “long march” towards Islamabad on Friday, according to a statement issued by the TLP media cell.

“The peaceful Namoos-i-Risalat march of the Tehreek-i-Labbaik Pakistan towards Islamabad will start after Friday prayers” from the TLP’s markaz (headquarters), the statement said, adding that the group also had a “plan B” in case its members were stopped from marching on the capital.

Hundreds of TLP workers have been participating in a sit-in in Lahore to exert pressure on the Punjab government for the release of its chief, Saad Rizvi, who has been kept in detention by the Punjab government since April 12 for “maintenance of public order”. The TLP on Thursday also continued it sit-ins in different cities of the country against the recent arrests of its party worker and leaders. A sit-in is also being held near Yateem Khana Chowk in Lahore.

The Punjab government is on alert in case the situation deteriorates and has further issued a security alert at all entry and exit points of Lahore. A large presence of law enforcers were reported around the Yateem Khana Chowk area and internet services have also been reportedly suspended. Roads from Kali Kothi, Iqbal Town, Scheme Moor, Sodiwal, Niazi Ada, and Samanabad have been sealed with barbed wire and containers

Earlier in October, the Punjab government approached the Supreme Court’s Lahore Registry challenging the Lahore High Court’s (LHC) order for the release of TLP chief Hafiz Saad Rizvi. The provincial government implored the apex court that the LHC had failed to note the intent and purport behind the introduction of the Section 11EEE [powers to arrest and detain suspected persons] of the Anti-Terrorism Act 1997.

In a statement issued prior to the announcement of the long march, the TLP’s Majlis-i-Shura (executive council) had decried that the group’s members had been staging a “peaceful protest” in the streets for the past 15 days, yet their demand for the implementation of an agreement reached between them and the government earlier this year remained unmet.

The agreement required the government to present the terms of a previous accord – signed between the two sides last year following protests by the TLP in a bid to pressurise the government to expel the French ambassador over the publication of blasphemous caricatures – in parliament before April 20.

The earlier agreement had said the government would reach a consensus in parliament regarding the expulsion of the French ambassador within three months, would not appoint its ambassador to France, would release all the arrested workers of the TLP and would also not register any case against the TLP leaders or workers in connection with the matter.

The TLP’s executive council had said in its statement that the government had promised the implementation of the agreement within three days of the signing of the accord but none of the commitments had been fulfilled even after the passage of six months. It had warned the government of announcing a plan of action if its demands remained unfulfilled.

“We have tried staging protests without blocking roads and have exposed the ugly face of the government to the public,” it had said, adding that a minister from Prime Minister Imran Khan’s cabinet had agreed to the terms of the agreement and now he was in denial.

The group has also claimed that scores of its members have been detained by the police during the ongoing protests. A TLP spokesperson said police had taken more than thousands of the group’s members into custody. The crackdown was launched after a meeting chaired by Inspector General of Police, Punjab Rao Sardar Ali Khan late on Monday. The report quoted an official as saying that the meeting had decided to launch a massive crackdown against the TLP for creating a law and order situation.

The TLP had taken out a massive rally on 12th of Rabiul Awwal (Tuesday), where its senior leaders delivered fiery speeches, accusing the government of using delay tactics in releasing Saad Rizvi. Addressing the participants, a member of TLP’s central executive, Syed Afzaal Hussain Shah, had made an announcement that a new series of protests would be launched. Later, hundreds of TLP workers had reached outside its headquarters in groups and blocked both sides of the busy Multan Road by staging the sit-in there. Afzaal had told the charged activists that the plan for the fresh agitation would be unveiled on Thursday at 5pm.