* Turkish president issued his comments ahead of next week's G20 summit in Rome, where he hopes to meet with Biden 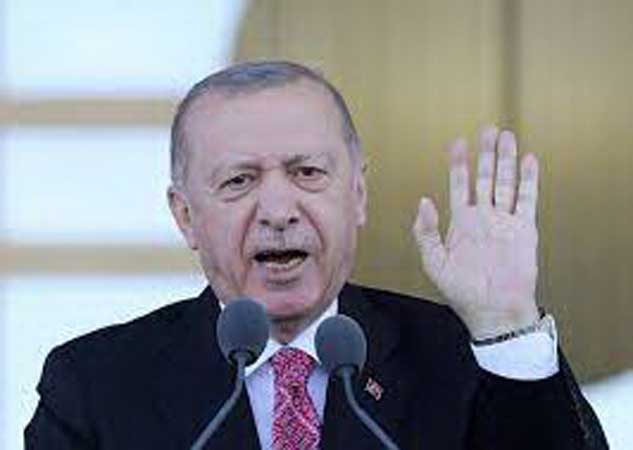 Turkish President Recep Tayyip Erdogan on Thursday threatened to expel the US, German and eight other Western ambassadors after they issued a rare joint statement in support of a jailed civil society leader.

Parisian-born philanthropist and activist Osman Kavala, 64, has been in jail without a conviction since 2017, becoming a symbol of what critics see as Erdogan’s growing intolerance of dissent.

“I told our foreign minister that we cannot have the luxury of hosting them in our country,” Erdogan told reporters in comments published by Turkish media.

Kavala has faced a string of alternating charges linked to 2013 anti-government protests and a failed military coup in 2016.

In their statement, the US, Germany, Canada, Denmark, Finland, France, the Netherlands, New Zealand, Norway and Sweden called for a “just and speedy resolution to (Kavala)’s case”.

The 10 envoys were summoned to the Turkish foreign ministry on Tuesday.

Erdogan sounded incandescent with rage in a conversation with Turkish reporters on board his return flight from a tour of Africa.

“Is it within your boundary to teach such a lesson to Turkey? Who are you?” he demanded in comments carried by the private NTV broadcaster.

The Turkish lira extended its fall into record-low territory against the dollar within moments of Erdogan’s comments on fears of a new wave of Turkish tensions with the West.

Speaking to AFP from his jail cell last week, Kavala said he felt like a tool in Erdogan’s attempts to blame a foreign plot for domestic opposition to his nearly two-decade rule.

“I think the real reason behind my continued detention is that it addresses the need of the government to keep alive the fiction that the (2013) Gezi protests were the result of a foreign conspiracy,” Kavala said in the interview.

“Since I am accused of being a part of this conspiracy allegedly organised by foreign powers, my release would weaken the fiction in question and this is not something that the government would like,” he said.

Kavala was acquitted of the Gezi charges in February 2020, only to be re-arrested before he could return home and thrown back in jail over alleged links to the 2016 coup plot.

The Council of Europe, the continent’s top human rights watchdog, has issued a final warning to Turkey to comply with a 2019 European Court of Human Rights order to release Kavala pending trial.

If Turkey fails to do so by its next meeting on November 30-December 2, the Strasbourg-based council could vote to launch its first disciplinary proceedings against Ankara.

The proceedings could result in the suspension of Turkey’s voting rights and even its membership.

Only one other nation, Azerbaijan, has faced disciplinary proceedings as serious as those now potentially facing Turkey.

In his latest comments, Erdogan once again compared Turkish philanthropist to Hungarian-born US financier George Soros, whose promotion of democracy has upset eastern and central European leaders.

“Those who defend this Soros leftover are working on ways how to free him,” Erdogan said.

“Do you free bandits, murderers and terrorists in your country?” Erdogan demanded of the West.

Erdogan issued his comments ahead of next week’s G20 summit in Rome, where he hopes to meet with US President Joe Biden.

The two leaders have had chilly relations, in sharp contrast to the personal friendship that Erdogan enjoyed with former US President Donald Trump.

The potential expulsion of US ambassador David Satterfield would come during a planned rotation of Washington’s chief envoy to Ankara.

On Tuesday, the US Senate Foreign Relations Committee approved the nomination of former senator Jeff Flake — a fierce Trump critic — as new ambassador to Turkey.