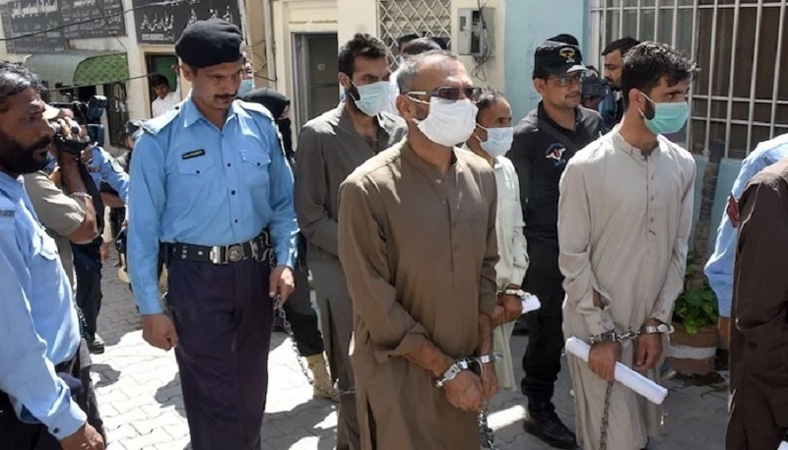 A sessions court in Islamabad on Wednesday commenced the trial in the Noor Mukadam murder case as the first formal witness, a police official, recorded his testimony.

Additional Sessions Judge Ata Rabbani conducted the hearing during which five arrested accused, including Zahir and his father Zakir Jaffer, were produced before the court. Zahir’s mother Asmat Adamjee and six Therapyworks employees, who were all released on bail, also appeared in the court.

The court scolded Zahir Jaffer, the main accused in the Noor Mukadam murder case, for violating the court’s decorum. Zahir earned the court’s ire after he attempted to speak again and again to interrupt the proceedings. The district and sessions judge ordered the police to silence the accused and the police complied with the orders.

Earlier, the police produced Zahir Jaffer, his father Zakir Jaffer and mother Asmat Adamjee before the court. The counsel of the accused apprised the court that his clients have challenged their indictment in the case at the Islamabad High Court. Notices have been issued in this regard, the lawyer added.

Meanwhile, the lawyers of accused in Noor Mukadam murder case concluded their arguments before Islamabad High Court’s (IHC) bench in their plea challenging their indictment and seeking provision of evidences record.

The court also served notices to respondent on the petition of Zahir Jaffar’s parents against the indictment by the trial court. Justice Aamer Farooq of IHC heard the case filed by the accused Zahir Jaffar, Asmat Jaffar and Tahir Zahoor regarding above matter. Petitioner’s lawyer said only copies of the statements of the witnesses were provided along with the copies of the challan. No other relevant record was provided, the lawyer said.

He said according to the law, copies of all the statements recorded before the police and the magistrate should have been shared with the defence.

The court said that you want to say that the statements of some people were recorded but they were not made witnesses.

The court took half an hour break and asked the defence side to view what record was still missing.

Later, the accused’s lawyer said that after looking at the record, it was found that the statement of a witness recorded before the police was not found.

The police said a copy of this statement was to be submitted along with the supplementary challan.

The supplementary statement of Shaukat Ali Muqaddam which was recorded was also being asked. Justice Amir Farooq asked whether any statement recorded by the police under section 161 has been left out or not? In this case, there was an eight-week directive to complete the trial.

Petitioner’s lawyer Asad Jamal said that he did not even provide CCTV footage. The public prosecutor said that they were also providing the transcript of the DVR.

Justice Amir Farooq said the court would pass the order. The documents were to be handed over to the lawyers of the accused in trial court.

During the hearing on the petition filed by the parents of Zahir Jaffer against the indictment of the accused by the trial court, the court served notices to respondents and adjourned the case till October 25.