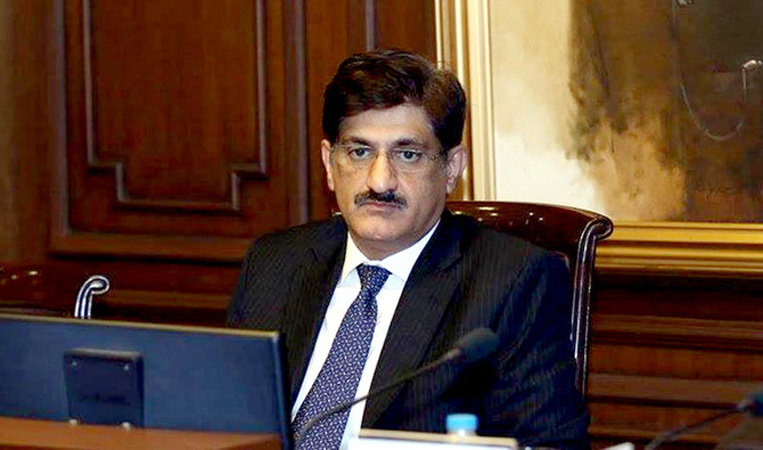 Sindh Chief Minister Syed Murad Ali Shah Wednesday said that the provincial government, just to give some relief to the low paid employees in public and private sector, has decided to ensure payment of Rs 25,000 minimum wage and may increase it further.

“For the purpose we are setting up a forum at the Labour and Industries departments to ensure proper implementation of government decisions in the public as well as private sector.”

This he said while addressing a press conference just after presiding over a cabinet meeting at the CM House here. He was accompanied by Minister for Labour Saeed Ghani, Minister for Education Sardar Shah and Minister for Industries Ikramullah Dharejo. Syed Murad Ali Shah said that the Sindh cabinet decided to task the Labour and Industries departments to implement payment of minimum wage of Rs25,000 in all government organizations and in the private sector.

The chief minister, replying to a question regarding Malir expressway said that its alignment was changed a bit to save some old villages but with the change of alignment cost of the project has increased. The change in alignment was not acceptable to some of the stakeholders, therefore his government has decided to take all the stakeholders on board. This was the reason that the project has been delayed, he added.

Talking about recruitment of teachers, Murad said that the School education department had announced 23,510 vacancies for Primary School Teachers (PST) and 14,039 of Junior Elementary School (JEST) against which 184,209 candidates appeared for PST and 164,319 for JEST, of them 11,549 qualified the test for PST and 01,385 for JEST respectively.

He said that the cabinet discussed the situation and decided to waive the condition of 45 percent marks and 50 percent marks were approved for minorities and girls and 33 percent for hard areas and differently abled persons to qualify the test. “In this way the vacancies would be filled to run the schools which are facing dearth of teachers,” he said and added the left over candidates who have qualified the test under the newly approved criteria but could not be appointed due to non-availability of vacancies, would be placed on waiting list for one year.

The health department proposed establishment of a Health Management Cadre (HMC) of doctors, who qualified with M.Ph to be posted on the administrative posts, after making necessary amendments in the recruitment rules.

The proposed amendment in the recruitment rules of doctors of BS-18, BS-19 and BS-20, including enhancement of eligibility criteria/qualification and method of appointment for doctors on administrative positions under HMC.

Under the new arrangement 60 percent doctors would be appointed as per HMC by promotion from Grade BS-17 having at least five-year service in grade BS-17 and 10 percent amongst grade BS-18 senior medical officers and 30 percent by initial appointment through the Public Service Commission. The cabinet after thorough consideration approved the amendment in the rules and the proposal of establishing HMC in the health department. The provincial cabinet on the recommendation of the health department approved handing over of eight health facilities to PPHI in Larkana district.

On the request of Pakistan Navy the provincial cabinet approved allotment of 200-acre land from N.C No.255 of Deh Lal Bakhar on 99 years lease to Pakistan Navy for residential purpose -Navy Cooperative Housing Society.

The cabinet also approved to transfer 433.25 acres of land stretching over 36 km from Vajihar to Thar Block-II to Sindh Engro Coal Mine Company (SECMC) for laying pipe for water supply scheme.

The cabinet was told that the Crime Scene Unit (CSU) was being established. The Crime scene investigation primarily deals with the identification, collection, proper packing, transport and analysis of evidence material.

The provincial cabinet approved the Provincial Assembly of Sindh Secretariat Services Bill, 2021 just to regulate the recruitment and the conditions of the services of persons appointed in the Secretariat of the Sindh Assembly.

The cabinet referred the bill to the provincial assembly for discussion and approval. The Sindh Urban Immovable Property Tax Act, 1958 under which the government may, by notification, for reasons to be recorded, remit in whole or part, the payment of tax by any class of persons in respect of any category of property in any rating area. After the amendment the provincial government would be able to provide relief to its citizens in case of any natural calamity such as earthquake, flood, pandemic etc.

The meeting was told that the development budget for 2021-22 has been allocated at Rs329.02 billion which include Rs222.5 billion provincial ADP, Rs30 billion District ADP, 71.16 billion Foreign aided projects and Rs5.36 billion federal PSDP grants. The cabinet was told that the Public Private Partnership (PPP) Unit was working successfully and it has already completed several projects. They include Hyderabad-Mirpurkhas Dual Carriageway, Sir Aga Khan Jhirk-Mullakatiar bridge on River Indus, Karachi-Thatta dual carriageway.