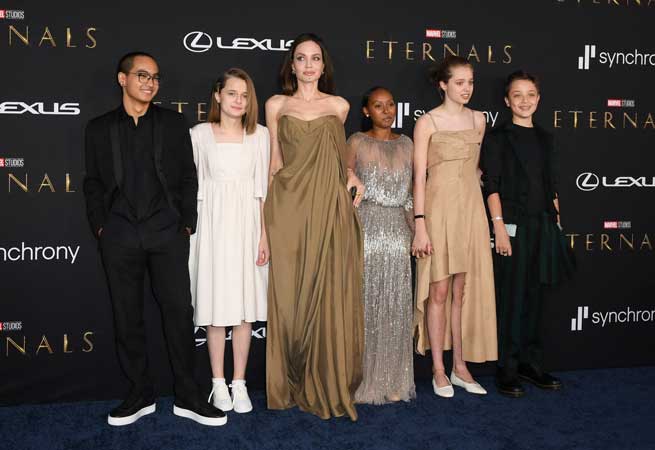 It’s all about family! The MCU fam expanded even further to welcome Eternals’ Angelina Jolie and Salma Hayek’s children at last night’s red carpet premiere, and star Jolie noted that it was the diverse cast that finally convinced her to join the Marvel family.

“It was the idea of this family and this way of showing superheroes” that led Jolie to join the film, premiering Nov. 5. Yet, her children Maddox, 20, Pax, 17, Zahara, 16, Shiloh, 15, and 13-year-old twins Vivienne and Knox had a hard time imagining their mother as a superhero onscreen. “I think they still find it really funny because they know me and Mom’s mom, and so maybe in some way it blew the universe, like, ‘Marvel’s so cool, but Mom? Mom’s a superhero?'” Jolie joked during E! News’ Daily Pop on Oct. 19. “They’re really supportive and I think they find it fun. It’s like those great friends, they’re here more in that loving and supportive way more than for themselves and excited. They back me up when I’m nervous and we kind of try to help each other out.”

Meanwhile, Jolie’s co-star and real-life pal Hayek had a girls’ night out with 14-year-old daughter Valentina. Hayek exclusively told E! News that she was craving becoming a superhero before she “lost all hope for it” after her 30s.

Now, with Eternals, Hayek “finally feels free” in the story that is being told. “You can play women that you identify with in so many ways and that people can identify with superheroes that have diversity in culture, in age, in ways of thinking. And before we didn’t have that,” she added. “It feels great and it feels like justice, in a way.” Eternals opens in theatres on Friday, Nov. 5.