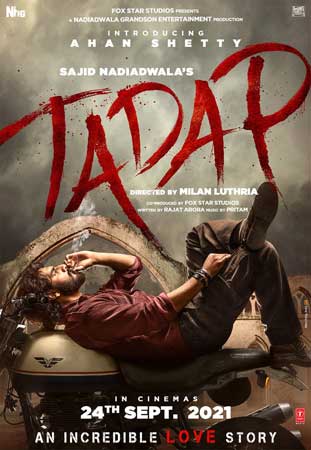 Sajid Nadiadwala’s ‘Tadap – An Incredible Love Story’ starring Ahan Shetty and Tara Sutaria is the most sought for release for audiences. A huge wave of excitement followed the release date announcement as Ahan Shetty is all set to make his debut with Sajid Nadiadwala opposite the young actress Tara Sutaria. Sajid Nadiadwala is all set to unravel the trailer of this love story on October 27. The film is a love story waiting to unfold on screens in the most exciting way with a fresh pair of Ahan Shetty and Tara Sutaria, the audiences are in for a lovely treat. When Ahan’s first look from the film was made public, the audience anticipation increased 10 fold as the look and poster was full of intrigue. ‘Tadap’ is a Milan Luthria directorial, starring Ahan Shetty, Tara Sutaria, Saurabh Shukla, Kumud Mishra and Sumit Gulati. The film is being produced by Sajid Nadiadwala and co-produced by Fox Star Studios, written by Rajat Arora and the soulful music in the film is by Pritam.