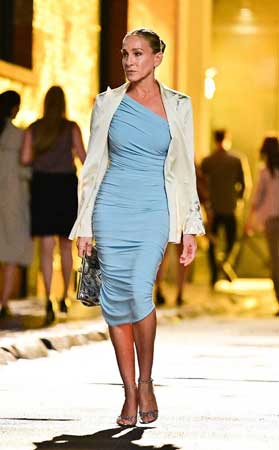 And Just Like That… Sarah Jessica Parker has Sex and the City fans swooning over her latest fashion moment as Carrie Bradshaw. While filming the upcoming revival series, And Just Like That, in New York City’s lower Manhattan area on Thursday, Oct. 14, the actress dropped jaws in a stunning baby blue bodycon dress by Norma Kamali. The asymmetrical design, which featured a sexy one-shoulder top, hugged Sarah’s curves with its sleek ruching. She accessorised the scene-stealing outfit with an oversized beige blazer and dazzling peep-toe heels by Aquazzura that were embellished with sparkly silver crystals. As for Sarah’s glam? The A-lister kept it simple and chic with a slick bun that was parted in the middle and appeared to have very minimal makeup on. Of course, costume designer Molly Rogers and co-costume designer Danny Santiago are the masterminds behind the new show’s fashion, which fans will get to see this December when And Just Like That premieres on HBO Max.