* 'Vanderbilt: The Rise and Fall of an American Dynasty' is the story of the greatest American fortune 'ever squandered' 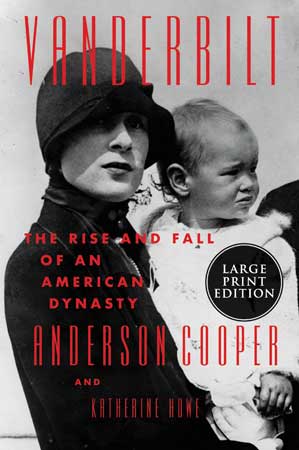 As a child, Anderson Cooper was “convinced that all grandparents turned into bronze when they died.” This was because his great-great-great-grandfather, Commodore Cornelius Vanderbilt, stood on a pedestal. He was now a bronze statue near Grand Central Terminal, facing Vanderbilt Avenue and the Vanderbilt Hotel after his death.

The Commodore was the richest man in America, having owned and built palatial homes, most notably the 70-room mansion called the Breakers, in Newport, R.I., and other homes in many states, and also sleek yachts, cars, and horse-drawn carriages, plus a dizzying assortment of jewels – anything his fancy desired. He made his fortune in shipping and railroads centuries ago. It all started with his ferrying goods about in New York Harbor when he was 11. Cooper, co-author with Katherine Howe, takes us back to the Vanderbilts’ early days in the book ‘Vanderbilt: The Rise and Fall of an American Dynasty’. In the introduction he says: “This is the story of the greatest American fortune ever squandered.”

Much of what came out of their lives was not happy. Take, for example, the chapter “American Royalty,” which opens with Consuelo, 17, sobbing on the morning of her wedding. In 1895, her mother, Alva, was forcing her to marry Charles Spencer-Churchill, ninth Duke of Marlborough, who, the press said was, “an empty-headed sprig of decayed nobility.”

Consuelo was desperately in love with someone else.

So many fascinating chapters are in this book, and so many amazing characters to spotlight, it’s hard to choose which ones to focus on in a short review.

The Commodore’s eldest son, William, “Billie,” was named president of numerous railroad empires, one after the next. At his death in 1885, he had cobbled together $200 million, doubling his father’s money in eight years, which would amount to $5.4 billion in today’s money.

But this book is about far more than money. Billie’s brother “Cornie,” for example, was put into numerous institutions over a period of 20 years because of severe epileptic seizures.

The authors often write about events in the Vanderbilts’ lives that mirrored what was going on in the real world. Anderson Cooper knew little of the Vanderbilts.

He was born to Wyatt Cooper and Gloria Vanderbilt, who, in her later years, was going prodigiously through her money. Cooper, whose brother tragically committed suicide by jumping off the balcony of his apartment while his mother stood helplessly by, was taught early on that there was no trust money for him, which made him driven and eager to climb to the top. He started saving his money as a young man, modeling as a child after school.

This is a nicely written, engrossing, in-depth view of the Vanderbilts that gives the reader much of interest to read in this book of colorful personalities. And much to think about.