* The explosion took place in the Bibi Fatima mosque, the largest mosque for Shia worshippers in the southern city of Kandahar
* Pakistan condemns the 'heinous terrorist attack' which has not yet been claimed by any group 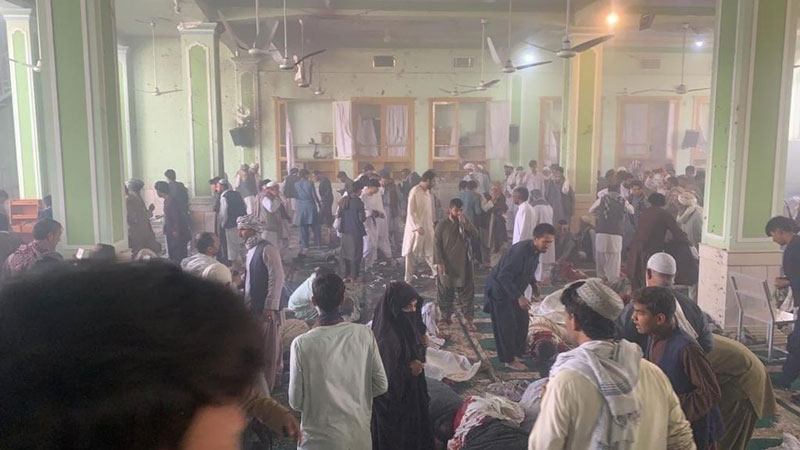 At least 47 people have been killed and 70 others wounded after an explosion went off inside a Shia mosque in Afghanistan’s southern city of Kandahar, according to a Taliban official.

The explosion on Friday afternoon took place in the Bibi Fatima mosque, the largest mosque for Shia worshippers in the city.

The assault came just a week after a suicide attack on Shia worshippers at a mosque in the northern city of Kunduz, which was claimed by the Islamic State group. There has not yet been any claim of responsibility for the attack in Kandahar, the spiritual heartland of the Taliban.

“Our initial information shows it was a suicide bomber who blew himself up inside the mosque. We have launched an investigation to find out more,” a local Taliban official told AFP.

Hafiz Sayeed, the Taliban’s chief for Kandahar’s department of culture and information, reported the number of dead and wounded. At least 15 ambulances were seen rushing to and from the scene, as Taliban security threw a cordon around the area.

“We are overwhelmed,” a doctor at the city’s central Mirwais hospital told AFP.

“There are too many dead bodies and wounded people brought to our hospital. We are expecting more to come. We are in urgent need of blood. We have asked all the local media in Kandahar to ask people to come and donate blood.”

Eyewitnesses spoke of gunfire alongside the explosions, and a security guard assigned to protect the mosque said three of his comrades had been shot as the bombers fought their way in.

Two more attackers detonated their bombs in crowded areas outside the main building, he and other witnesses said. “We are saddened to learn that an explosion took place in a mosque of the Shia brotherhood in the first district of Kandahar city in which a number of our compatriots were martyred and wounded,” tweeted Taliban interior ministry spokesman Qari Sayed Khosti. Taliban spokesperson Zabihullah Mujahid said that the Islamic Emirate condemned the incident and considered it a “great crime”. He said that the perpetrators would be arrested and brought to justice. Meanwhile, the Foreign Office (FO) issued a statement condemning the “heinous terrorist attack”.

“The government and people of Pakistan convey their support, and heartfelt condolences, to the people of Afghanistan and stand in solidarity with them in this hour of grief. “Pakistan condemns terrorism in all its forms and manifestations, including despicable attacks on places of worship,” FO spokesperson Asim Iftikhar Ahmad said. Inside the mosque, after the blast, the walls were pockmarked with shrapnel and volunteers swept up debris in the ornately painted prayer hall. Rubble lay in an entrance corridor.