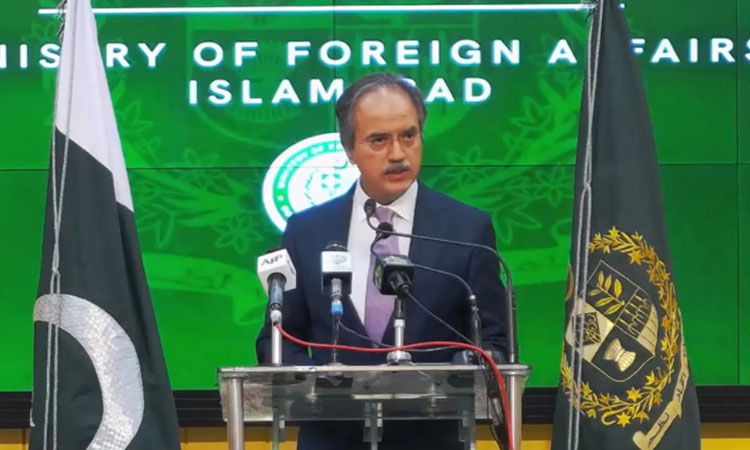 Pakistan on Friday while reiterating its love for peace, resolved that it would spare no effort to resolutely thwart any aggressive Indian designs.

“While Pakistan is a peace-loving country, we will spare no effort in resolutely thwarting any aggressive Indian designs, as was evident from Pakistan’s swift response to India’s Balakot misadventure in 2019, including the downing of Indian combat aircraft and capture of Indian Air Force pilot,” Foreign Office Spokesperson Asim Iftikhar said.

The spokesperson, in his weekly press briefing, said Pakistan had repeatedly drawn the attention of international community to India’s sinister designs of staging “false flag” operations to implicate Pakistan and Kashmiris.

Apprising the newsmen of situation in Indian Illegally Occupied Jammu and Kashmir, he said during last week, 10 innocent Kashmiris had been martyred in fake encounters and so-called “cordon-and-search-operations”.

It is reprehensible that even mortal remains are not being returned to families, and proper burials are being denied, he added.

“Kashmiri youth are the main target of India’s repression. We have strongly condemned the arrest of over 1400 Kashmiris on false charges in one of the biggest ever crackdowns in IIOJK. This is a serious concern for the international community,” the spokesperson said.

He said India had simultaneously stepped up its nefarious smear campaign against Pakistan and Kashmiris. For example, the baseless allegations of so-called ‘infiltrations’ across the LOC and fake arms recovery operations.

He said India would be well advised to stop peddling falsehood, and change its behaviour that could otherwise further undermine regional peace and security.

Referring to recent “irresponsible and provocative” statement reportedly made by Indian Home Minister threatening so-called “surgical strikes”, he said it demonstrated the BJP-RSS combine’s propensity to stoke regional tensions for both ideological reasons and political expediency, based on enmity towards Pakistan.

He said Pakistan continued to urge the international community to hold India accountable for its egregious human rights violations in IIOJK, and its persecution of minorities elsewhere.

He welcomed the recent statements by the OIC General Secretariat on the treatment of Muslims in Assam, and the IPHRC’s call for accountability for increasing Islamophobia, and systematic and targeted violence and mob attacks against Muslims in India.

Regarding Afghanistan, he said the recent international engagements with Afghanistan were positive steps. The US-Taliban talks in Doha are important in that regard, he added.

On its part, Pakistan stands with the people of Afghanistan. Over 900 Afghan students enrolled in Pakistan are being facilitated to travel to Pakistan to resume their studies.

He also apprised media of President Arif Alvi’s UAE visit to inaugurate the Pakistan Pavilion, Foreign Minister Shah Mahmood Qureshi’s video statements at 6th Ministerial Meeting of the Conference on Interaction and Confidence Building Measures in Asia (CICA), the High-Level Commemorative Meeting to mark the 60th Anniversary of the Non-Aligned Movement (NAM) and the ongoing celebration of establishment of 70 years of diplomatic relations between Pakistan and various countries, including China, Argentina, Spain, Germany and Thailand.

About the visit of US Deputy Secretary of State to Pakistan, the spokesperson said it underscored the importance of long-standing relationship between Pakistan and the US.