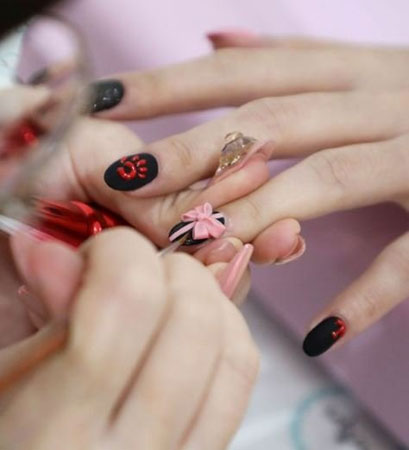 Netflix Original South-Korean series Squid Game, has garnered a huge fan base within a month of its release.

The soaring popularity of the show has given it the biggest opening of 111 million viewers in the history of the streaming-giant’s viewership. And while companies across the globe are trying to inculcate their marketing strategies in-line with the show, a salon in Malaysia is providing Squid Games inspired manicures to its customers.

The Maniqure Nail Salon on the outskirts of Kuala Lumpur, has designed a set of nails for each of the show’s nine episodes. The nail art from the show’d first episode, Red Light, Green Light features a giant doll while customers who pick episode two, Hell, are given a pink-ribboned coffin, as reported by Gulf News.

Salon co-owner Lim Pei Xim talked about her intricate art, describing it as rather a challenging task.

“Is it difficult to draw? Yes a little bit because … it’s all 100 percent hand painting, not printing,” she said. “Every fine line we have to stop breathing.”