* 'Think about that, Jimmy,' she said, appearing to delight in the moment 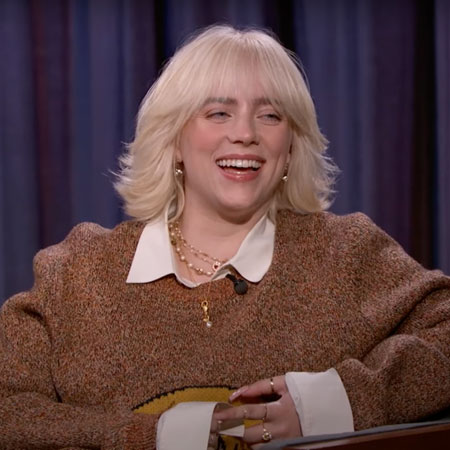 Billie Eilish decided she might as well jump at the chance to call out Jimmy Kimmel for their infamous previous interview that caused quite a stir on social media.

On Wednesday, Oct. 13, the 19-year-old music superstar visited Jimmy Kimmel Live, and at one point, Jimmy mentioned he had a copy of a bucket list she had written back in 2014. The 53-year-old host said Billie was 14 at the time, but she corrected him to clarify she was actually 12.

“Think about that, Jimmy,” she said, appearing to delight in the moment. “How old were you in 2014?”

This provided a natural segue for her to bring up their highly debated 2019 interview, during which Jimmy had quizzed Billie on a list of pop culture references that were popular back in 1984 when he was her age, many of which appeared to be unfamiliar to her. This had included Van Halen, Run-DMC and Cabbage Patch Kids.

“Wait, really quick,” Billie said with a big smile during the new interview. “Do you remember last time I was here?” When Jimmy confirmed that he did, she continued, “And you made me look a little stupid.”

This led Jimmy to explain, “Well, yeah, accidentally. I didn’t do it on purpose.” Billie added, “I thought it was funny because I was playing along, and everybody thought I was actually serious and didn’t know anything.”

He pointed out that “everyone jumped down your throat, like, ‘Oh, you should know who Van Halen is.'” But the “Bad Guy” vocalist shared, “It was funny-I didn’t really care.”

Billie then declared she would attempt to stump him by asking about popular Gen Z references, and Jimmy appeared delighted by the potential challenge. Alas, she didn’t appear to be able to really think of anything on the spot, and so they moved on. Back in November 2019, Jimmy asked the then-17-year-old star if she was familiar with Van Halen, to which she had responded, “Who?” This led Jimmy to quip, “I’m gonna start crying.”

The following month, she appeared to reference the interview while accepting an award at Variety’s Hitmakers event, although she didn’t mention Jimmy by name.

“Thank you for not making me look stupid, like everybody else wants to do on TV,” Billie said to the event’s staff from the podium at the time. Ultimately, she appeared to have the last laugh during tonight’s appearance. One of her 2014 bucket list items was to punch someone, and so Jimmy gamely let her hit him in the chest.