I was jumping with excitement seeing that reaction to my picture: Taapsee

* Taapsee has over time, carved a niche in cinema and is known for high-content, issue-driven cinema 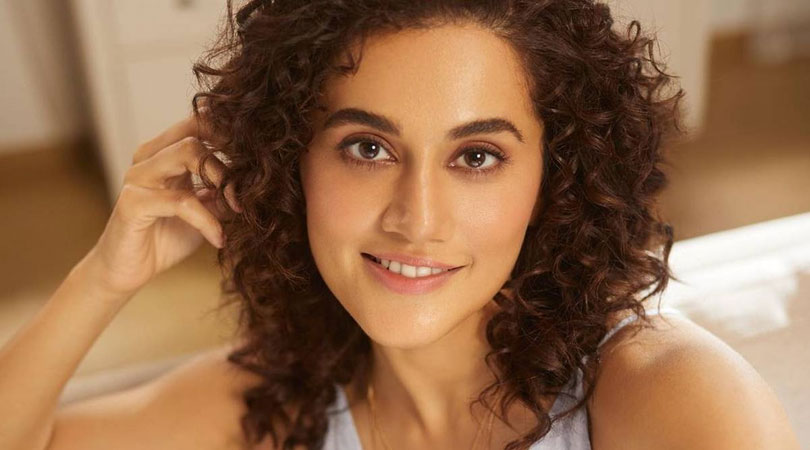 For Taapsee Pannu, success means people believing in her films, being invested in them.

“I shouldn’t be so irrelevant that nobody is bothered by what I’m saying or doing,” she asserts. Taapsee, who’s gearing up for the release of Rashmi Rocket, adds that whatever she does “should be worth the time and attention of the audience.”

Taapsee has over time, carved a niche in cinema and is known for high-content, issue-driven cinema. She feels that going back to the typical commercial cinema might be tad difficult for her. “If I do films which don’t revolve around an issue, some people will raise eyebrows. Now you see my situation, if my film caters to an issue, there’s a section that claims I only do films with a ‘mudda’, and if there isn’t any, even that’s a problem. So I’m stuck in a situation where ‘naa chitt meri, naa patt meri’. I’ve understood that I cannot make everyone happy with my choices. I’d rather make myself happy and create a filmography where I can look back and be proud of,” she told indianexpress.com.

Rashmi Rocket has Taapsee playing a sprinter who gets banned from the sport due to high testosterone levels after she is forced to undertake a gender test. She challenges India’s athletics association and takes the legal route to win back her lost respect and identity.

Taapsee was shooting for Game Over when Rashmi Rocket came to her. “I was shocked that despite personally loving sports, I was unaware about gender testing. I did Google search and found out this really happens. So many female athletes get banned and also end up damaging their life in so many ways. There’s so much social shaming that happens. I realised it’s a story that hasn’t been told in mainstream and I knew it’ll hit hard.”

Post the release of the trailer, many stated that Rashmi Rocket reminded them of Dutee Chand’s real story in 2014. Infact, the film is also set in the same year. Taapsee, however, says it’s not a biopic. She shared that they deliberately didn’t make it about one person’s journey. “We assembled a lot of events and put them together in one storyline. I stayed away from going into a full-fledged one-person reference. I saw interviews of different athletes across the world. Rashmi Vira is an amalgamation of all these female athletes who’ve gone through it. It was very important to validate with scientific facts and not emotionally,” she said.

Taapsee collaborated with director Akarsh Khurana and actors Priyanshu Painyuli and Abhishek Banerjee for the first time in Rashmi Rocket. Though she laughed at the irony of Akarsh helming a film where fitness was an integral part, she added that because it was not just a sports film but a human story, he was the best bet.

“Sports is just in the backdrop. We needed someone who could do strong storytelling, with a heart and soul, rather than make it look larger than life. Clapping and whistling becomes a part of it,” Taapsee said. She added that it was her first time with Priyanshu too though she had heard a lot of good things about his work from Akarsh and also Anurag Kashyap. “Abhishek had this urge to give it his best, because he was doing such a role for the first time. My greed is to collaborate with good actors because my acting improves around them.”

Taapsee underwent rigorous training to get an athletic body and muscles. The races and track sequences are among the highpoints of the film too. “Every muscle of mine ran!” she said with a laughter.

Further calling it one of the rare films that easily “has the potential of being that full blown commercial film along with an issue at heart,” Taapsee said it was heartbreaking when the makers decided to go for an OTT release for Rashmi Rocket. “You can enjoy the song and dance, the grandeur, have that adrenaline pump of the races, but you’ll also cry at the end of it. Rarely you get a script with such a range.”

“The female-driven films that I’ve done till date are all about a girl who’s an underdog and then she becomes the hero of her life. Here, Rashmi is a hero from the first frame. For me, she was a heroic big screen character,” she added.

However, days before the release of its trailer, Taapsee came under fire for looking “masculine” in one of the film’s stills, with trolls calling her “not enough of a woman”. But Taapsee claims she took everything in her stride since that was the plot of Rashmi Rocket.

“Those trolls gave me a promotional strategy on a platter. They didn’t even realise what hit them. It was like you struck gold, I was jumping with excitement seeing that reaction to my picture. Then when the trailer came out, I reacted that if you throw lemon at me, I’ll make lemonade out of it,” she gushed. Taapsee lands in controversy every now and then, including I-T raids against her a few months ago. The actor said with a smile, “They are like speed-breakers, and my vehicle isn’t fragile that it’ll collapse so easily. And life will become too boring if we don’t have such things.”

“Obviously it’s human to feel bogged down for bit when any such problem comes, and not just IT raids. It’ll either break you or make you a better person. I would rather become a stronger person. That’s the only constant and that’s okay. I don’t have any complaint about these hurdles. I just want my audience to trust me,” she concluded.