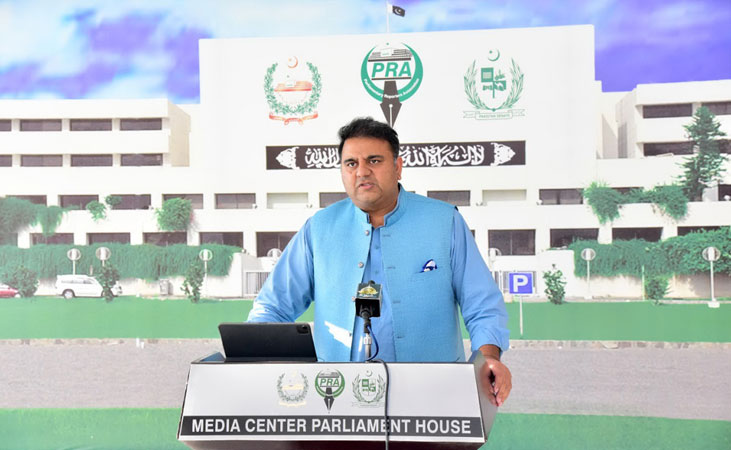 Minister for Information and Broadcasting Fawad Chaudhry on Thursday said it is a ‘routine practice’ for the prime minister to meet candidates before appointments are made to key positions such as the ISI chief.

Addressing a press conference in Islamabad after a PTI parliamentary party meeting on Thursday, the minister quoted the prime minister as emphatically saying that the army and the government are on the same page, and that he has a very cordial relationship with Chief of Army Staff General Qamar Javed Bajwa.

He said that the PM remarked that never before in the history of Pakistan had the relations between the civil and military leadership been as good as they were today. He said that credit goes to COAS who has always given institutional support to democracy and civilian government in Pakistan. Today, the people of Pakistan cherish the honour and dignity of the army, he maintained.

“The process for appointing the new DG ISI will be completed soon. The game that a specific section wants to play on this has been defeated. Now it is being said that the prime minister will hold interviews for the new DG ISI,” Fawad said. “A meeting before such appointments is conventional. Making this process controversial is highly inappropriate,” he added.

Fawad said the prime minister informed the parliamentary committee that matters related to the appointment of ISI chief have been ‘fully settled’. “The process has started, his appointment will be expedited, both the civil and military sides are on board and the decision will be taken in an atmosphere of mutual trust,” he added.

In response to a question about when the government would notify the new ISI chief, Special Assistant to the Prime Minister on Political Communication Shahbaz Gill said, “Do not take this so [urgently]. It is serious business.” He said that the information minister would share the news with the media as soon as the prime minister “makes a decision” and urged the media to refrain from sensationalising national matters.

The interior minister, who was also cornered by reporters after the meeting, said that the prime minister had given a briefing on the situation in neighbouring Afghanistan while the recently formed Rehmatul lil Alameen Authority was also discussed. Commenting on the DG ISI’s appointment, Ahmed said that all things were “settled” and that relations with the army were “excellent”. The interior minister, however, declined to comment on who the premier would appoint and said that “there was no talk of interviews”.

Earlier, PTI parliamentary board in its meeting with Prime Minister Imran Khan in chair unanimously nominated Jamshed Iqbal Cheema as party candidate for the bye-election in Lahore. Political matters relating to Lahore and bye-election were discussed in the meeting.