After meeting with PM, Jam Kamal refuses to step down 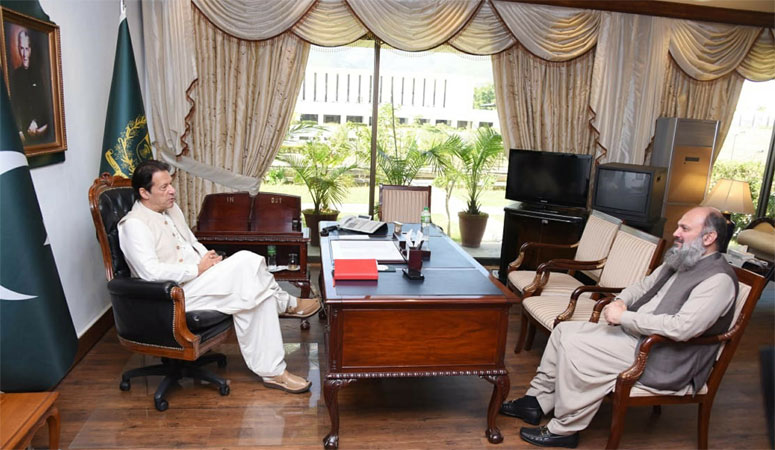 Jam Kamal has refused to step down as the chief minister of Balochistan after he held a meeting with Prime Minister Imran Khan amid the deepening political crisis in the country’s largest province. He expressed the faith that a no-confidence motion filed against him by his own party members would fail.

The chief minister told media after he met the prime minister that a session of the Balochistan Assembly would be summoned within a day or two for a vote of no-confidence against him.

Alyani met the premier at the latter’s office in Islamabad to discuss the situation in Balochistan, days after disgruntled lawmakers of the ruling Balochistan Awami Party (BAP) and allied parties closed the door on any reconciliation by submitting a no-trust motion against the chief minister in the provincial assembly secretariat.

Alyani claimed that the no-confidence motion against him will not succeed. “It will be good if voting is held [on the motion] so that the situation becomes clear,” he said, according to a government handout. Although he refused to divulge the final date for the vote, he said it would take place in the next three to four days.

Asked about the meeting, Alyani said he and the prime minister had discussed development schemes in Balochistan. He quoted Prime Minister Imran Khan as saying that Balochistan’s progress was among the federal government’s top priorities. Noting that the federal government had announced a “historic” package for Balochistan, Prime Minister Imran said the government was taking steps to bring Baloch youth into the national fold. On Thursday, Alyani wrote a letter to the Election Commission of Pakistan, saying the BAP secretary general’s announcement about the appointment of an acting president had “no constitutional or legal value”.

He argued that the secretary did not have the authority to appoint an acting president, and reiterated that he had not resigned as the BAP president, according to a party statement.

Provincial minister Buledi was appointed as the acting president of BAP on October 11, but CM Kamal took back his decision to step down from the office a day after. On the other hand, BAP’s spokesman Sardar Abdul Rehman Khetran accused the chief minister of horse-trading as he demanded that Kamal tenders his resignation. On Monday, the disgruntled members of the provincial assembly (MPAs) – including lawmakers from BAP and allied parties – had submitted a no-confidence motion against Kamal. A similar move was made back on September 14, when as many as 16 MPAs from the Balochistan Assembly had moved a no-confidence motion against CM Kamal, but it was later denied by the Governor House Secretariat on technical grounds.

A day before CM Kamal’s meeting with the premier, Buledi had sought the prime minister’s intervention into the province’s political issues. “The prime minister, being an ally, should play a positive role amid the political crisis in Balochistan […] we seek his intervention so that matters do not deteriorate and [we have to choose to move] the no-confidence motion,” he said while addressing a press conference. Buledi noted that a PTI lawmaker had also signed the no-trust motion submitted to the secretariat of the Balochistan Assembly. He added there was a disagreement within the PTI about Kamal continuing as the chief minister.

The signs of the ongoing political crisis in Balochistan were first seen in June this year, when opposition members had camped outside the provincial assembly’s building for days in protest against the government led by Alyani for its refusal to allocate development funds for their constituencies in the budget. The protest had led to mayhem and police had later booked 17 opposition lawmakers in connection with the incident.

Following that, 16 members of the opposition had filed a no-trust motion against the chief minister. However, the Governor House Secretariat had returned the motion to the Balochistan Assembly on technical grounds.