Pakistan will ‘never be up for sale’: NSA

* Moeed says decisions were taken in the past without taking the public on board, which ultimately backfired 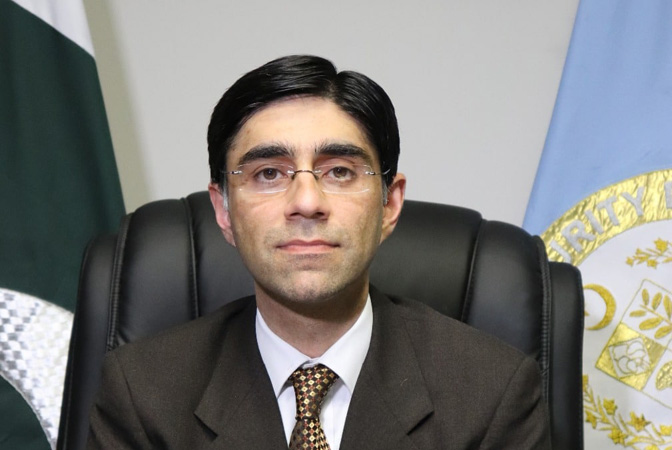 National Security Adviser Dr Moeed Yusuf has said that Prime Minister Imran Khan has set a new paradigm whereby ‘Pakistan will never be up for sale’, but will stand for its interests.

“Pakistan is going to stand for what its interests are, not emotively but very pragmatically,” he said in an interview. “This has invited much criticism, with many deeming it a mistake, but it is true – Pakistan no longer will host bases,” he said, with regard to not allowing the air bases to any other country in future.

Dr Yusuf said for the past 20 years, there was an unwinnable war that “some wanted Pakistan to win for them, which was simply an unrealistic goal”. He mentioned that in the past, decisions had been taken without taking the public on board, which ultimately “backfired”.

“This is a paradigm that this prime minister has set with every country and not just the United States,” he said, adding that “If there is a condition which Pakistan does not feel to be in its interest, we will not go for it”. Dr Yusuf said Pakistan, at the cost of being looked upon as insincere, kept emphasizing that the war in Afghanistan could not be won militarily.

He said Pakistan also stressed the need to talk with the Taliban, not because it was pro-Taliban, but “because it was the only way to solve this problem”.

Referring to the exit of military forces from Afghanistan, he said the non-military strategy could have saved the Western world from embarrassment.“They bought New Delhi’s and Kabul’s narrative – lock, stock, and barrel – and this is what they have gotten for it,” he said.

To a question on progress following his twice meetings with the U.S. counterpart held in Geneva and Washington in July, he said, a blueprint was agreed upon detailing how to move forward on commerce, investment, climate, health, etc.

Dr Yusuf said Pakistan was “not in any camp” and emphasized that despite its relationship with China, it wanted very good relations with the U.S. He stressed that the contours of Pak-U.S. relationship could not be from the lenses of Afghanistan, India or China. “It has to be a bilateral relationship, a give and take as equals where mutual interests lie. That has to be worked out now,” he said.

Dr Yusuf reiterated that Pakistan was not in the ‘old mold,’ whereby the U.S. could divide and rule Pakistan’s house, talk to one official to get something done, use the civil-military disconnect that used to happen and get what it needs.

“There is no civil-military disconnect anymore, and a coordinated effort is in place,” he said. “I have said this in public before, and I will say it again; 150 percent support from the military, the ISI, and the prime minister is in place”.

The NSA said China was a key pillar of the vision of Pakistan’s north-south connectivity coming through the China-Pakistan Economic Corridor. He said Pakistan wanted the U.S. China and Russia to co-invest in Pakistan.

To a question regarding the response of the U.S. after it was offered to invest in the CPEC reprocessing zone, he said, the response was ‘yes.’ “We need to work through and see what arrangements can be made and what companies would be interested in coming here,” he said. He said Pakistan was now the “melting pot” of all positive global economic interests as an essence of its geo-economics.

Dr Yusuf hoped that the new situation in Afghanistan would turn into a connectivity corridor, which the Ghani government had deliberately stalled because they did not want Pakistan to benefit.

“But now, with peace and stability holding in Afghanistan as things move forward, Central Asia and Pakistan can be connected. This is very positive,” he said.

He said as India in the past used the Afghan intelligence NDS to attack Pakistan, however he said, Pakistan had made it clear to the Afghan Taliban that “this was unacceptable”. The Taliban, he said, had assured Pakistan that this would not happen again from the Afghan territory.

To a question on recognizing the Taliban government, he said, “We are not talking of recognition; that is a separate conversation. We need to engage because we have a 2,600-kilometer shared border.”

“So the world needs to think through this for their own sake – Pakistan’s position is only in self-interest,” he said.

He proposed that there needed to be an agreement and a coordinating mechanism on engagement with the region and the rest of the world before recognition of the Taliban government.

“Pakistan stands with the international community on how we move forward,” he said, referring to the new government in Afghanistan.