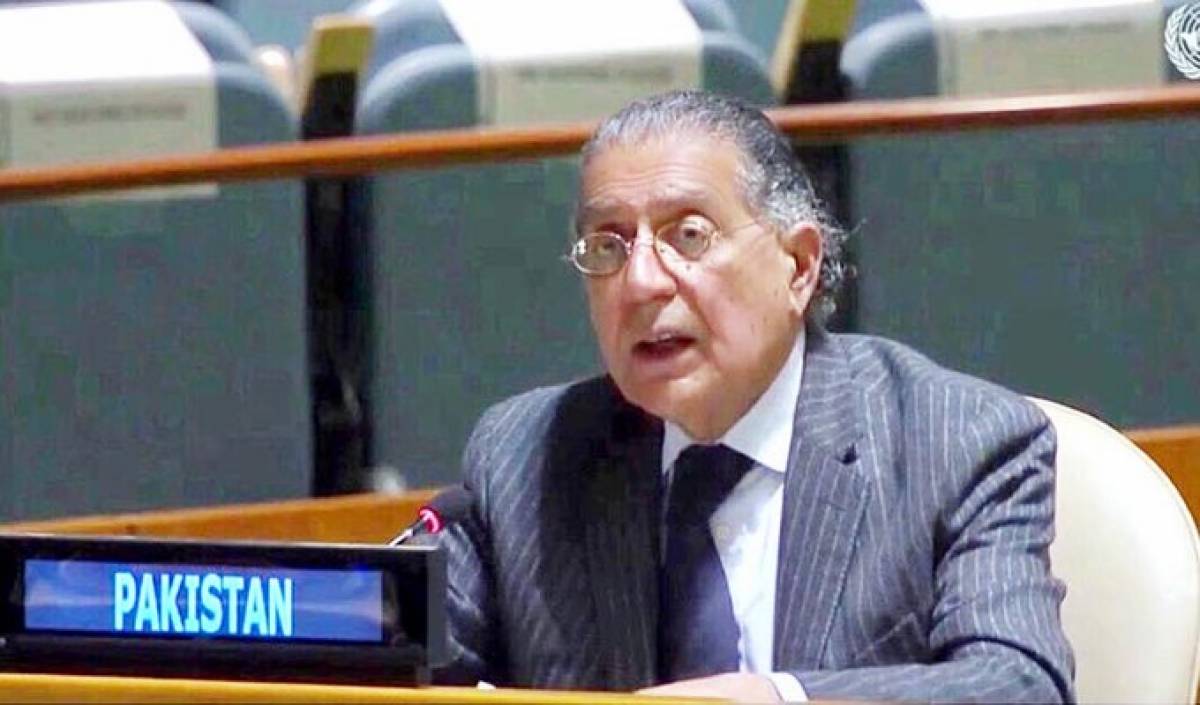 UNITED NATIONS: A top Pakistani diplomat has urged the international community to recognise the threat ‘Global Hindutva’ poses to the ideals of democracy, peace, diversity and state-building, warning that the radical doctrine seeks to destabilise neighbouring countries.

“The rise to power of right-wing and neo-fascist groups through electoral processes in certain countries is a disturbing phenomenon,” Ambassador Munir Akram said in a written statement submitted to the UN Security Council on Tuesday.

The 15-member body was holding a high-level debate on diversity, state-building and the search for peace, organised by Kenya, which holds the rotating Council presidency this month.

Elaborating his remarks, the Pakistani envoy said that South Asia was witnessing the rule by a populist, supremacist government, elected on the basis of an agenda of religious exclusivity and hatred for other religious and caste communities.

“It brands the Muslim minority and certain ‘castes’ as racially inferior and even as ‘untouchables’,” he said, adding that this was contrary to every principle of equality and human rights.

“The campaign to extinguish the freedom sought by the Muslim majority in occupied Jammu and Kashmir is ominously termed as the ‘Final Solution’,” Ambassador Akram said.

“Alarmingly,” he added, “these extremist ideologies also seek to destabilise neighbouring countries through a concerted campaign of disinformation and fake news as a weapon of foreign policy.”

Resolution 2282 of the Security Council, he said, underlines the vital importance of ‘inclusion’ in state-building which has become more relevant in the wake of the deadly coronavirus pandemic, exacerbating social and economic inequalities threatening the very fabric of national cohesion in several countries.

Vaccine equity is the first and foremost pre-requisite for advancing inclusivity, especially in conflict affected countries”, the Pakistani envoy said, adding that the world must act in a way that is responsive, emphatic and effective.

In this regard, he emphasised, fragile countries require consistent substantial engagement and development support to meet the basic needs of their people and prevent a reversion to social turmoil and conflict.

These countries require adequate financing to generate economic activity and overcome liquidity constraints, and Member States and multilateral institutions should support these endeavours through such means as comprehensive debt restructuring, expanded ODA (official development assistance) and reallocation of a larger proportion of underutilised Special Drawing Rights (SDRs) to them.

“The freezing of the resources of countries coming out of conflict is particularly deplorable,”Ambassador Akram said, pointing out that it was a recipe for chaos and renewed conflict.

He also stressed that physical infrastructure, such as transportation, energy, water and sanitation facilities, were integral to promoting stability and state building. There was also empirical evidence that investments in ‘social infrastructure projects ’, such as rule of law, health and education could promote sustainable economic growth in fragile countries.

In a diverse society, he said, education can unite people, and Pakistan has decided to introduce a single national curriculum across all elementary, primary and secondary schools in the country.

“The initiative aims to strengthen national unity, assimilation and build a common set core of values,”the Pakistani envoy told delegates from around the world.

In the same vein, Pakistan has initiated several social protection and poverty alleviation programs such as ‘Ehsaas’ (empathy) and Kamyab Jawan (accomplished youth), under which the Government provides stipends and interest free loans to citizens from low-income backgrounds.

“Pulling people out of poverty is at the heart of Government’s efforts to build a stable, strong and prosperous Pakistan,” Ambassador Akram said.

The UN’s peace & security and development pillars should continue to work in tandem to help countries, he said, adding that the role of the Peace-building Fund (PBF) was vitally important.

The Pakistan envoy called for ending massive illicit financial flows from developing countries and ensure the return of stolen assets. These laundered assets, if returned, could be channelled toward the cash-starved state-building needs of these countries.

“Prime Minister Imran Khan has consistently urged the international community to take a ‘decisive action’ on capital repatriation of stolen and illegal transfer assets of developing countries,” Ambassador Akram said, warning that inaction could lead to mass migration from the poor to the rich countries.