Rupee plunges to new all-time low of 171.04 against dollar 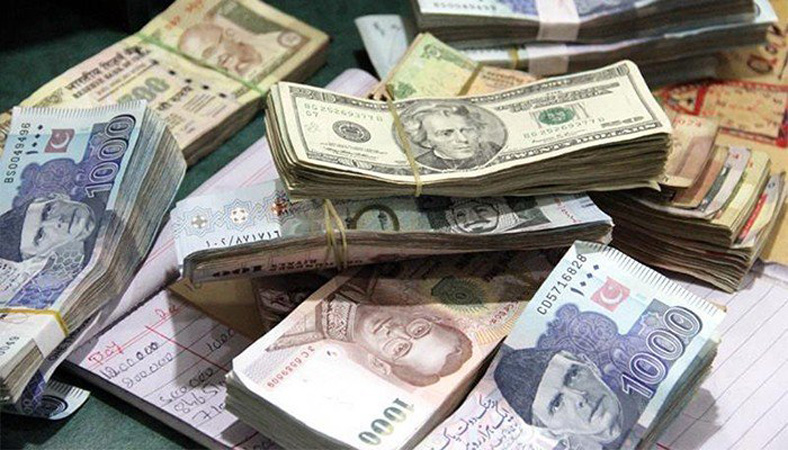 Pakistani rupee plummeted to a fresh all-time low of 171.04 against the US dollar on Tuesday, breaching the earlier October 6 low of 170.96, mainly due to surging import bill and Afghan situation.

The rupee continued to bear the pressure despite a 17 percent year-on-year increase in remittances sent by overseas Pakistanis, which stood at $2.7 billion in September 2021, and higher exports. Moreover, the administrative measures taken by the government a day earlier on Monday after a series of actions taken by the State Bank of Pakistan to check rupee depreciation also failed to bear fruit.

Earlier, the rupee made a historic low of 170.96 on October 6, 2021 against the US dollar. The fresh all-time low of the local currency can be attributed to the latest reports of massive rise in import bill during the first quarter of the current fiscal year. The import bill of the country registered a record increase of 65 percent to $18.63 billion during July–September of the current fiscal year, compared with $11.28 billion in the corresponding period of the last year.

The higher import bill also widened the trade deficit significantly. The trade deficit ballooned by almost 100 percent to $11.66 billion during the quarter under review, compared with the deficit of $5.81 billion in the same period of the last year. On the other hand, the Afghan situation has also been impacting the rupee-dollar parity since August 15 last.

The Pakistani rupee shed Rs0.51 during the last two days against the US dollar, while depreciation during the fiscal year 2021-22 has been Rs13.62. The local unit has shed Rs10.77 against the US dollar in the current year 2021. The local currency has maintained a downtrend after it touched 22-month high of Rs152.48 in May 2021, losing a cumulative Rs18.73 in the past five months to date.

The State Bank of Pakistan (SBP) has taken various measures recently to discourage import of non-essential and luxury items and support the balance of payments position. However, these measures are apparently not fruitful to support the local currency.