* ‘Surprised my fiancé with our newest member to the Family,’ Sam wrote on Instagram on Friday 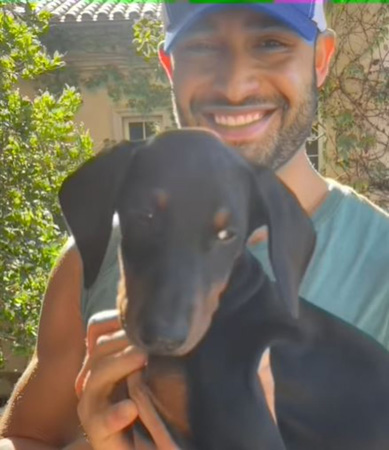 Britney Spears has a new furry friend in her life to help keep her safe following her conservatorship victory. The pop star’s fiancé Sam Asghari surprised her with a female Doberman puppy, who will grow to be much larger than the toy breeds she’s acquired over the years. The new dog will also play a very different role: Protector.

“Surprised my fiancé with our newest member to the Family,” Sam wrote on Instagram on Friday, Oct. 8. “Porsha #doberman #homesecurity.”

He shared a video of himself holding the pup while talking to Britney, who asks, “Who’s the new addition to the family?”

“Her name is Porsha and she’s meant to unconditionally love you and it’s going to will be trained to protect you from any motherf–ker that comes around you with bad intentions,” Sam replies, giving the pup a kiss.

Britney’s fiancé also showcased his own protector abilities with an Instagram Story repost of a Simi Valley, Calif.-based gun store’s graphic depicting him firing a heavy pistol while wearing protective eyewear and a holster.

The shop tagged him and Britney and the post features her 2011 single “Criminal.”

He shared a video of himself holding the pup while talking to Britney, who asks, ‘Who’s the new addition to the family?’

Porsha’s arrival comes more than a week after Britney’s father Jamie Spears was suspended from a conservatorship that has controlled her life for 13 years, per the pop star’s request. Following his removal as overseer of the singer’s $60 million estate, the judge will discuss in November whether to end the conservatorship entirely.

In The New York Times Presents: “Controlling Britney Spears” documentary, released on Hulu and FX on Sept. 24, a former member of Britney’s security team claimed that the firm’s president “had an audio recording device put into Britney’s bedroom.” The TV program alleges the device captured over 180 hours of audio, including Britney’s interactions and conversations with her boyfriend and her children, and that it is unclear if the court was aware of such surveillance. In California, it is illegal to record confidential conversations without consent.

Jamie’s lawyer said in a statement to the New York Times, “All of his actions were well within the parameters of the authority conferred upon him by the court. His actions were done with the knowledge and consent of Britney, her court-appointed attorney, and/or the court. Jamie’s record as conservator – and the court’s approval of his actions – speak for themselves.”

The security firm, Black Box Security, said in a statement shown in the documentary, “Black Box have always conducted themselves within professional, ethical and legal bounds and they are particularly proud of their work in keeping Ms. Spears safe for many years.”

In the documentary, the former security team member also said that they worked for Jamie and that he had them monitor his daughter’s phone. The program shows an email from one of Jamie’s lawyer stating that Britney’s father “confirms that he has no access to her calls, voicemails and texts.”

In a court filing submitted after the documentary was released and before Jamie was removed as Britney’s conservator, the singer’s lawyer wrote, how The New York Times “reported that Mr. Spears engaged in horrifying and unconscionable invasions of his adult daughter’s privacy.” The attorney added, “Mr. Spears has crossed unfathomable lines. While they are not evidence, the allegations warrant serious investigation.”