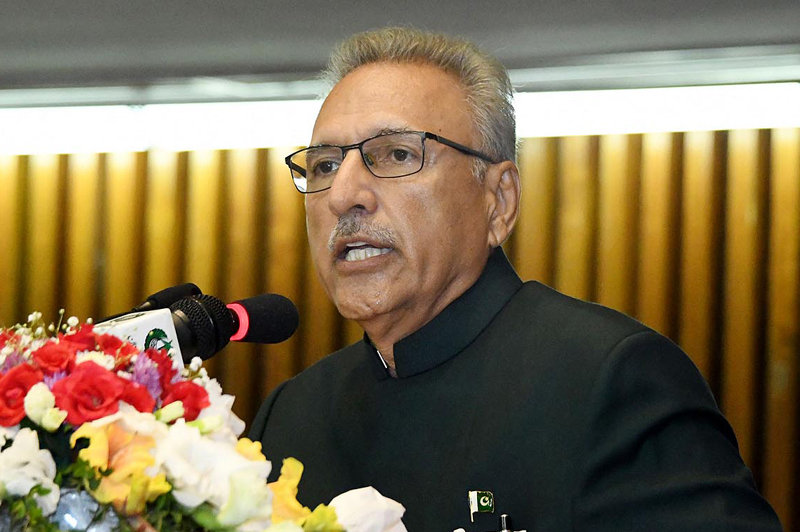 President Dr Arif Alvi has stated that peace in Afghanistan will bring prosperity in the region and open a window of business opportunities for the world to connect with Central Asian states through the war-torn country.

“Devastation in Afghanistan means more refugees in Pakistan. We don’t want any instability in our neighbouring country and hope to see an ‘inclusive government’ representing all political stakeholders,” Dr Alvi said in an interview with Khaleej Times during his two-day visit to UAE.

Dispelling the impression that Islamabad has been backing the change in regime, the President said Pakistan was not an active player in Afghanistan.

“We are just helping the Taliban on humanitarian grounds as the Afghans are suffering due to sanctions and blockage of funds. There is a flight of capital from Pakistan to Afghanistan. So, it is in our interest to bring stability in the country,” he said in the interview published by Khaleej Times on Monday.

The newspaper quoted President Alvi terming the US withdrawal “a hasty call” and that there was no military solution in Afghanistan.

“We always tried to persuade the US into avoiding war, and back negotiations as a better solution. If US and Nato forces are unable to bring stability in Afghanistan despite spending $2.3 trillion, then how will Pakistan be able to do that?,” the President asked.

Dr Alvi said that Pakistan has been hosting four million refugees and stressed that such a gesture must be considered as a matter of goodwill by the Afghan people.

“We have also played very active and positive role in repatriation of diplomats and other people from Afghanistan and the world has acknowledged our efforts,” he said.

President Alvi said inflation was on the rise worldwide and Pakistan was not the only country in the world facing this challenge.

“Inflation is high because commodities and oil price are increasing in the international market. However, the government will be taking steps to control the food inflation through supply chain mechanism and good governance,” he said.

Replying to a question, he said the country was on the right track and its future was bright.

“The government has taken right steps at the right time to overcome serious challenges such as the Covid-19 pandemic, jobs creation and reviving the economy. We have managed to register close to four per cent GDP growth rate in last financial year despite the pandemic,” he said.

About the Expo 2020 Dubai, the president said it is a wonderful event and all credit goes to the visionary leadership for hosting a successful show despite a challenging environment worldwide.

“The Expo 2020 is a landmark event not just for the UAE, but also for the whole region. It offers a unique opportunity to the countries of the region and beyond to establish linkages and partnerships with multinational companies,” the president said.

“We have a very beautiful pavilion at the Expo. I suggest everyone should go to the Expo and must visit the pavilion projecting Pakistan’s positive image as a peaceful country,” the President said.

Dr Alvi also expressed grief over sad demise of nuclear scientist Dr Abdul Qadeer Khan who passed away in Islamabad on Sunday morning at the age of 85. “He helped us develop nation-saving nuclear deterrence and a grateful nation will never forget his services in this regard,” he said.