‘Ghostbusters: Afterlife’ is a movie by a family about a family

* Afterlife's engaging cast has the comic beats down, and they also play more fully fleshed people than the first film offered 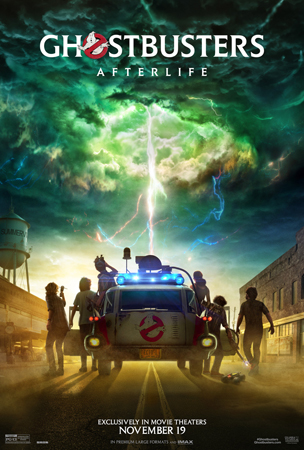 In his brief onscreen introduction before Ghostbusters: Afterlife begins, director Jason Reitman calls it a movie “by a family about a family.” Picking up the baton from his father, Ivan Reitman, who helmed the franchise-spawning 1984 blockbuster (and who serves here as producer), Reitman is carrying on a family business, perhaps creating a family tradition. And the characters at the center of his film are discovering their familial ties to ghost-hunting history. But a larger family is being addressed here: the legions of fans of the pop culture phenomenon, who will thrill to every lovingly placed Easter egg, each casting “surprise” and end-credits stinger.

Unveiled Friday in a surprise screening at New York Comic Con, the feature is sure to strike a multigenerational moviegoing chord when Sony releases it just before Thanksgiving.

If the pre-Digital Age wonders of the Ghostbusters universe – the Ectomobile, the ghost trap, the, um, portable nuclear particle accelerator – have never set your heart racing (guilty as charged), the chance to see the original versions dusted off and returned to active duty won’t arouse any pangs of nostalgia. But this fourth big-screen Ghostbusters iteration (after 1989’s not-quite-adored Ghostbusters II and the 2016 female-led reboot) also retains the other key aspect of the original formula: the deadpan drollery and sharp timing.

Afterlife’s engaging cast has the comic beats down, and they also play more fully fleshed people than the first film offered, reflecting the director’s interest in character-driven stories. The movie finds Reitman (Thank You for Smoking, Up in the Air, Young Adult) in less sardonic territory than usual, with some predictable heartstring-tugging in the backward glances. In various ways, Afterlife pays tribute to the late Harold Ramis, who starred in and co-wrote the first two movies with Dan Aykroyd. When one character receives news of the death of Egon Spengler, Ramis’ character, for any viewer aware that Ramis himself died in 2014, the reaction spills beyond the frame; it’s about more than the fictional figure.

As franchise update, origin story, coming-of-age movie, comedy and indulgent f/x extravaganza, the feature, written by the director and Gil Kenan (Monster House), hits all its marks. A significant part of the pleasure for fans will be the unwrapping of those Easter eggs and the reappearance of certain characters – none of which I’ll spoil here. The only thing I’ll reveal is that Carrie Coon’s real-life husband, writer-actor Tracy Letts, has an uncredited cameo as a store owner, and there’s a particularly whimsical twist on a high-profile creature from the 1984 movie.

Coon plays Callie, a single mother who’s barely making ends meet (her occupation is never mentioned). She receives news of her estranged father’s death just as she’s facing eviction from her Chicago apartment, and heads to Oklahoma to pack up his house, sell it, and, she hopes, collect an inheritance. Her kids, 15-year-old Trevor (Finn Wolfhard) and 12-year-old Phoebe (Mckenna Grace), could not be less stoked about spending the summer in the middle of nowhere. Their grandfather’s dilapidated farmhouse sits on uncultivated land near a speck of a town called Summerville, where the locals invariably respond with surprise upon learning who these newcomers are: “The dirt farmer had a family?”

While Trevor crushes on the slightly older Lucky (Celeste O’Connor, very good), a self-assured waitress at Spinner’s Roller Hop, science whiz Phoebe bonds with two people from summer school. The first is a precocious podcasting kid with a flair for dramatic narration (Logan Kim, deftly delivering some of the film’s funniest lines). The second is their teacher, Gary Grooberson (Paul Rudd). A moonlighting seismologist – because of course he is – Grooberson keeps his students occupied with VHS tapes of 1980s horror movies while he researches the strange quakes that have been rattling Summerville. Having ruled out fault lines, volcanic activity and fracking, he embarks on a new line of inquiry after Phoebe discovers a ghost trap in her grandfather’s house.

An expository phone call will fill in pieces of backstory, but much more effective is the way Reitman integrates clips from the original film in the form of YouTube videos that Phoebe watches. They’re part of her research after Grooberson clues her in to the New York City hauntings of the ’80s and she figures out who her grandfather was.

As new friendships bloom – Phoebe does her best to ignore the flirtation between Grooberson and her mother, played to awkward, sincere perfection by Rudd and Coon – old gizmos are cranked back to life, among them ghost-zapping proton packs and the souped-up ambulance-style Cadillac rusting in the garage. In a nice touch, the 2021 characters admire the analog gadgets they discover, regarding them as well-crafted antiques even as they put them to heavy-duty use. Soon, in various combinations, Phoebe, Podcast, Trevor, Lucky and Mr. Grooberson are hunting down metal munchers and other spirits on Main Street, drawing the unwanted attention of the sheriff (Bokeem Woodbine).

There are shades of other screen stories, not least the Wolfhard starrer Stranger Things, in the way the four kids form a ghost-fighting team and delve into the scary unknown. And the idea of something uncanny being stirred up in the flat, open stretches of the heartland setting, with its cornfields and single looming mountain, bring to mind The Wizard of Oz and Close Encounters of the Third Kind. DP Eric Steelberg’s crisp, fuss-free images suggest something heightened amid the everyday, especially in the movie’s late going, when a change in the light evokes the feeling of a storm brewing – or something apocalyptic.

But how and why the shapeshifting Sumerian deity Gozer, chief villain of the original tale, rises again is anybody’s guess; as with pretty much everything Ghostbusters, the logic here doesn’t bear the slightest scrutiny. The supernatural stakes never feel high – in this supposed battle of good versus evil, the fate of the world never seems in the balance. Whether the Ghostbusters are on the job in midtown Manhattan or the sticks, the story is local, the hauntings neither eerie nor frightening, but a weird mix of pseudoscience, nonsense and f/x overkill.

Those effects are certainly smoother this time around, even while keeping within the visual vernacular of the 1984 film (it was the first big-screen comedy to devote a significant portion of its budget to high-end special effects). But whatever shocks the movie delivers are thanks to the juiced-up jolts of its sound design, while Rob Simonsen’s orchestral score injects mood-amping energy without being intrusive. In the old house filled with secrets and the abandoned structures of what was once a mining town, François Audouy’s production design builds layers of atmospherics, some understated, some with a kid-targeted simplicity. But even the small Chinese restaurant where Callie and Gary have their first date has a terrifically lived-in vibe that enhances their getting-to-know-you jitters.

In a less complex role than she usually plays, Coon is typically persuasive. She shows, in her unforced way, how Callie’s anger over being abandoned by her father has hardened her, and just as convincingly reveals the pluck and adaptability beneath the toughened surface. Rudd strikes the ideal chord of goofy geekdom and boyish enthusiasm, while Wolfhard captures Trevor’s adolescent yearning for independence as well as his puppyish infatuation with a more sophisticated girl.

But it’s Phoebe who’s the movie’s true protagonist, and Grace is thoroughly winning as an impatient and dismissive smarty-pants who subtly undergoes a seismic shift, not unlike the mother with whom she often clashes. You can see Phoebe opening to unlikely possibilities when, in one of the film’s loveliest details, she communes with a benevolent spirit in the farmhouse, beginning with a mysterious game of chess.

In its climactic sequence, the movie gives in to a more than a bit of self-congratulatory schmaltz – catnip for fans. And though it winks at some of the jabs and critiques that place the original film within the Reagan-era culture of privatization, it also doubles down on the American dream of entrepreneurial destiny. In this Afterlife, nostalgia is a double-edged sword and little has changed: The ghosts are elaborately fantastical MacGuffins that have nothing to do with life and death. But they require vanquishing, and this time there’s more of a rooting interest, delightfully so, in the people called to do the job.