Chris Jericho says if you can connect to audience, you’ll have them as fans

* Last summer, Chris revealed that Fozzy's next LP will contain 12 songs, including one cover 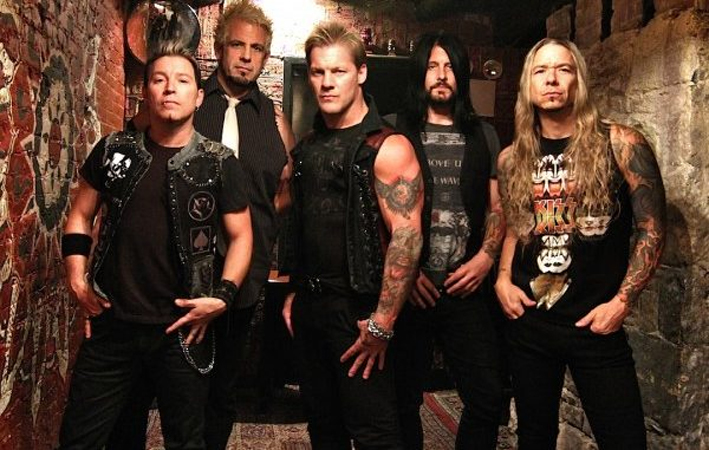 During a recent appearance on the “Reinvented With Jen Eckhart”, Fozzy singer and wrestling superstar Chris Jericho was asked if any of the other rock musicians he is friends with have offered him any helpful words of advice as his band was making its name in the business. He responded: “I think there’s been a lot of guys that I was fans of that I’ve become friends with – someone like Paul Stanley [KISS], who’s always cool. I talk to Lars [Ulrich] from Metallica; he’s a very good friend of mine.

“I don’t really ask any advice from these guys, but you kind of follow in their footsteps.

“When you’ve been in show business as long as I have – 31 years coming up this week, next week, whenever it may be – you pick and choose the qualities and the ideas from the different guys that you admire,” he explained. “As a frontman, for example, I was a big [fan of] Paul Stanley, David Lee Roth [Van Halen], Mick Jagger [The Rolling Stones], Freddie Mercury [Queen] – those type of guys. Bruce Dickinson [Iron Maiden]… You watch how these guys perform and how they captivate a crowd, and there’s a real art form to it. And it’s not easy. It’s like being a podcast host. It’s not easy being a podcast host. And people think it is, because there’s literally a million podcasts, and a lot of ’em come and go so fast. So there’s a real art form to it, and there’s an art form to being a frontman of a rock and roll band. Yes, it’s important to sing. Yes, it’s important to have that power. But you also have to be the party host, the ring leader, get people involved in the show. That’s what people want. That’s what I always wanted as a fan, and I still do.

“Like I said, it’s the same thing when I first started wrestling – you take the inspiration and you add it to your own little blender and put a lot of yourself in it and kind of shake it all up and that’s what you get. And Chris Jericho the wrestler is different from Chris Jericho the singer, but there are qualities that kind of interact and blend in both.

“Being a live performer, whether you’re a comedian, a wrestler, a singer, a Shakespearean actor, there is a real element that you have to connect to the audience,” Jericho added. “If you can connect to the audience, you’ll always have them as fans. If you can elicit that emotion from them where they’re excited to see you, then you’ll always have them the next time you come to town.”

Last month, Fozzy guitarist Rich Ward was was forced to sit out several of the band’s shows for personal medical reasons. Fozzy still performed in his absence as a four-piece.

In May, Fozzy dropped a video for its first new song in two years, “Sane”, which hit one million views in its first two weeks. This first-of-its-kind video was filmed on the longest wooden roller coaster on the planet today.

This past February, Jericho told Detroit’s WRIF radio station that Fozzy’s follow-up to 2017’s “Judas” album would “continue with the momentum that [the] ‘Judas’ [title track] started for us [four] years ago.”

Last summer, Chris revealed that Fozzy’s next LP will contain 12 songs, including one cover.

Ward and producer Johnny Andrews once again did “the lion’s share” of the songwriting for the new LP, which was recorded primarily in Atlanta, Georgia.

In addition to producing “Judas”, Andrews previously co-wrote Fozzy’s “Lights Go Out” track back in 2014. He has also written songs with the likes of All That Remains, Three Days Grace and Halestorm.