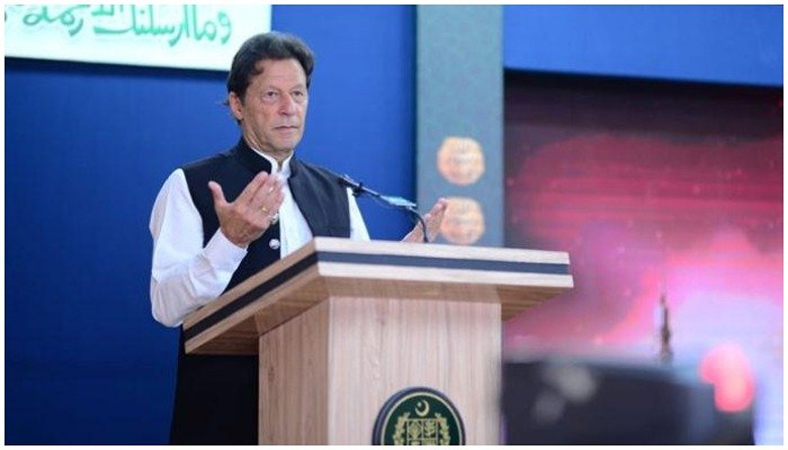 Prime Minister Imran Khan Sunday announced the formation of a Rehmatullil Aalamin Authority, which he said, would portray before the world a true image of Islam besides carrying out research on Seeratun Nabi (PBUH).

The prime minister, addressing the Ashra-e-Rehmatullil-Aalamin (PBUH) conference here, said the proposed body would comprise Islamic scholars of international repute who would help acquaint the children and elders about the teachings of Holy Prophet (Peace Be Upon Him). He said the international advisory board will comprise top professional Muslim scholars from across the world. He also said that the chairman of the authority will be a competent scholar who will be well versed in the subject and an academic who had done scholarly work.

The PM said the core objective of the Rehmatul-lil-Alameen Authority was not only to appraise but also inculcate the teachings of Holy Prophet (PBUH) and his way of life in the lives of kids and adults alike. The authority was tasked to project the actual image of universality, diversity, and inclusivity of Islam to the whole world, he added.

The Rehmatul-lil-Alameen Authority will monitor the effectiveness of the Seerat-un-Nabi (PBUH) material, which was recently added to the curriculum, to see its effectiveness and recommend any changes or improvements. It will also forward recommendations and add teachings of other religions that preach humanity and inclusivity so that non-Muslims can also get acquainted with the true spirit of their respective religions. The authority will encourage and facilitate research at universities on the ‘Golden Age of Islam’ and the various aspects surrounding the leadership and highest moral standings of the Islamic leaders at the time, which led to the rapid spread of Islam, he commented. He said the authority will also conduct data-driven research and forward recommendations on addressing the moral decay in the family institution of Pakistan and other aspects of Pakistani society that directly affect the youth of this country to address rising sex crimes and divorce rates. The scholars at Rehmatul-lil-Alameen Authority will provide alternate content ideas and programming, especially for the kids and youth, to address the adverse use of Social Media and TV.

Imran Khan said Muslims around the world and Pakistanis should start an intellectual debate surrounding the life and teachings of Holy Prophet (PBUH) to address Islamophobia and intellectually respond to episodes of blasphemy. “We will take our country in the direction of the vision for which Pakistan was created 74 years ago.”

The PM said the Ashra-e-Rehmatullil-Aalamin (PBUH) would be celebrated in a befitting manner. He said progress and development of a society depended on following the principles of Riyasat e Madina and teachings of Holy Prophet (PBUH) who set standards for building of moral character, system of justice and service to humanity. He said the powerful never want that justice should prevail in a society but they always look for an ‘NRO’. “For 500 years, Muslim scientists were not only well versed in their area of specialization but also in religious matters,” he recalled. “We have to teach children as to who should be their role model. We should teach our children about the teachings of great Sufis like Hazrat Data Ganj Bukhsh, Mian Mir, Bulleh Shah and others.”

He said 25 years back, from day one of formation of his party he struggled for creating an Islamic welfare state. He emphasized that the society should fight against corruption as alone government can fight corruption only to an extent.

He said reforms would be announced in the electoral system to make polls fair and transparent. Pakistan is the first country to introduce neutral empires in cricket and this time electronic voting machines would be introduced to stop pre- and post-poll rigging, he declared. The prime minister said obscenity was an ill in society and was having a bad and disastrous impact on the social and family life. Religious scholars should play their role in stopping obscenity and to save family system, he said, adding that the divorce rate in society had risen to a dangerous level and had a very adverse impact on children of the divorced parents. He urged media to play its role to save the families from the ill effects caused by media. “We cannot stop the expansion of media, social media and technology but we should engage our youth and tell them about the Islamic values.”