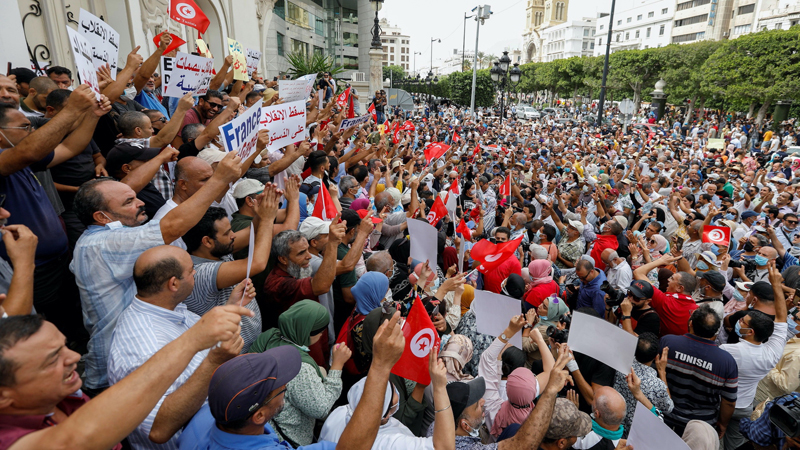 At least 6,000 Tunisians rallied on Sunday against a presidential power grab in the only democracy to have emerged from the Arab Spring uprisings a decade ago.

Despite checkpoints and security screenings of protesters, it was the biggest rally yet against the actions of President Kais Saied, who on July 25 sacked the prime minister, suspended parliament and granted himself judicial powers, after months of political stalemate.

Saied followed up the move last month with measures that effectively allow him to rule by decree.

A police source said the crowd numbered between 6,000 and 8,000 at its peak, all flowing towards Bourguiba Avenue in central Tunis.

“The people against the coup d’etat,” “Raise your voice, the revolution is not dead,” the anti-Saied demonstrators called, waving red-and-white Tunisian flags.

“I’m here as a democrat and supporter of Moncef Marzouki,” who served as president between 2011 and 2014 and now lives in Paris, said a man in his 50s as he bought a flag.

Many others identified as supporters of the Islamist-inspired Ennahdha party, which was the biggest in the now-suspended parliament.

Some complained to AFP about alleged police intimidation to prevent them moving forward.

“I’m not your enemy, I’ve come out of love for Tunisia,” a demonstrator with the country’s flag in his hand told a policeman.

‘We’re the ones who elected Saied!’ Helmeted, black-clad riot police were deployed, and demonstrators were forbidden from entering a stretch of Bourguiba Avenue where the interior ministry is located.

“The rally is blocked,” and “shame on you,” a voice in the crowd called.

The size of Sunday’s rally exceeded that of an estimated 2,000 who demonstrated against Saied’s “coup d’etat” on the same thoroughfare two weeks earlier.

Last week however, an estimated 10,000 people rallied countrywide in support of the president, police sources said.

Tunisia was the birthplace of the Arab Spring uprisings, with the resignation of the country’s dictator Zine El Abidine Ben Ali in January 2011.

Although Saied’s July measures enjoyed significant public support, civil society groups have warned of a drift away from democracy.