Early elections the ‘only way forward’ 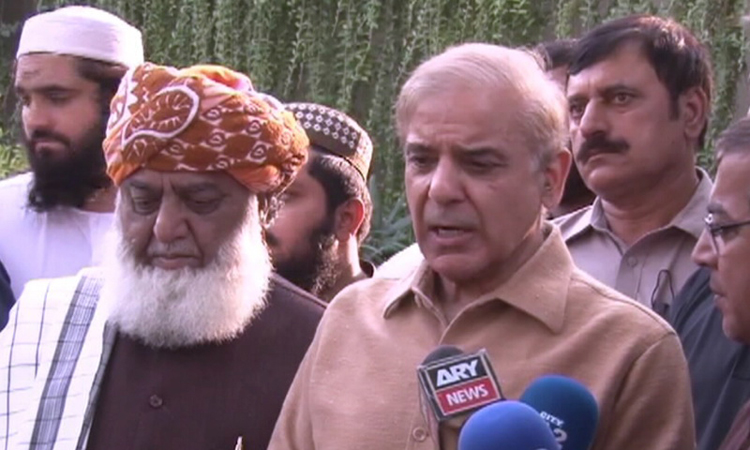 The Pakistan Democratic Movement (PDM) on Saturday called for early elections in the country, adding that holding elections is the quickest way to recommence Pakistan’s journey towards prosperity.

The demand was put forth by PDM chief Maulana Fazlur Rehman and Leader of Opposition in National Assembly Shahbaz Sharif as they addressed a press conference following a meeting at the latter’s residence.

The Leader of the Opposition in the National Assembly said all political parties and the masses demand free and fair elections in the country, which is the ‘only way to take Pakistan forward’. He termed immediate elections the ‘need of the hour’ and the ‘only way forward’ for Pakistan amid rising inflation and economic crisis. “This is not an easy path; we will have to commit all our energies to it, work, day and night, and only then can we take the country back to the state it was in during 2018 – after that, we can take the country towards progress,” he said. “For this, we need to hold free and fair elections,” he reiterated.

Shahbaz said the country’s political developments were discussed in detail during the meeting. He added that matters related to PDM, skyrocketing inflation, increase in electricity, flour prices, and dengue – which is wreaking havoc in the country – also came under discussion.

Responding to a question, Shahbaz said if Fazl calls for a long march against the government, he and his party would back him.

Calling out the government for failing to resolve public issues, PML-N President Shehbaz Sharif said, “We will have to work day and night and utilise all resources to bring the country back to the pre-2018 state,” he told journalists. He reiterated his call for launching a movement against the government over ‘unprecedented inflation’ which he said had caused hardships for the masses.

The PML-N leader said the Pakistan Democratic Movement (PDM), an alliance of opposition parties, was united in its cause and that raising a voice against inflation was the right of the people.

Shehbaz called out Prime Minister Imran Khan for ‘improper handling of sensitive matters’, saying “history is a witness to sacrifices rendered by the institution responsible for Pakistan’s defence. Even Modi could not harm it the way Imran did”.

Speaking to reporters, Fazl said the PDM alliance is steadfast and serious in achieving its goals of ousting the incumbent government – which was the original motive when the alliance was formed in September last year.

Fazl said a ‘historic’ public gathering would be held in Faisalabad on October 16 and a large gathering would take place in Dera Ghazi Khan on October 31. Prior to this, JUI-F has announced it will hold the Mufti Mehmood Conference on October 14. “The people want to get rid of the government which has been forced on them, and to resolve this issue, there is a need to hold elections at the earliest,” the PDM chief said, adding, “The institutions have been ruined.”

The PDM chief said teachers, lawyers, doctors, landowners, labourers, farmers, were all drastically affected due to the government’s policies, and a poor person cannot afford to put food on the table due to the rising inflation. “This is a serious situation,” Fazl said.

The PDM chief added that “even Indian Prime Minister Narendra Modi could not have damaged Pakistan the way the country’s incumbent, prime minister, Imran Khan has”. He said opposition parties would have to think of ways to steer the country out of this crisis.

Fazl said reports were circulating on media for the last couple of days about the army, which he said was an important institution for Pakistan. He hailed the “unity of command” and the public support the army enjoyed but went on to say that the premier had “harmed that institution”. “I am not talking about internal matters. We can differ on political fronts, but we want to see this institution disciplined and strengthened for the country’s defence,” he said.