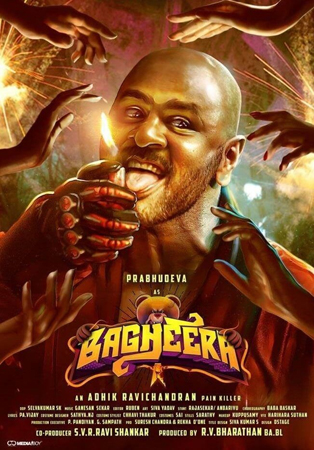 The trailer of upcoming film Bagheera was released on Friday. Starring Prabhudeva in the lead role, the film is written and directed by Adhik Ravichandran.

Judging by the trailer, Bagheera seems like a riff on Simbu’s Manmadhan. Remember the 2004 crime drama about a serial killer who murders women who have more than one lover? In Bagheera, we can see Prabhudeva’s character slaughtering women claiming he is some sort of an avenger for those men who are in tears after being betrayed by women.

We see Prabhudeva in different get-ups, suggesting that the actor may be playing multiple roles in the film. Or at least that’s what Adhik Ravichandran wants us to believe.

Prabhudeva’s look as a bald killer with glasses calls to mind the look of Sathyaraj from Nooravathu Naal. The actor seems to have pushed himself out of his comfort zone to give us a whacky thriller, filled with usual over-the-top dance numbers, glamour and dollops of dark humour. And by the looks of it, it is going to offend a lot of sensibilities.

Adhik Ravichandran made his debut with the 2015 adult comedy Trisha Illana Nayanthara. The film, starring GV Prakash Kumar, was surprisingly lauded by critics and the audience. Later, he directed Simbu in Anbanavan Asaradhavan Adangadhavan. The movie ran into a lot of trouble after Adhik had a fall out with Simbu over the latter’s alleged tardiness. The film bombed at the box office and was berated by critics

Will Bagheera put his career back on track? Only time will tell.