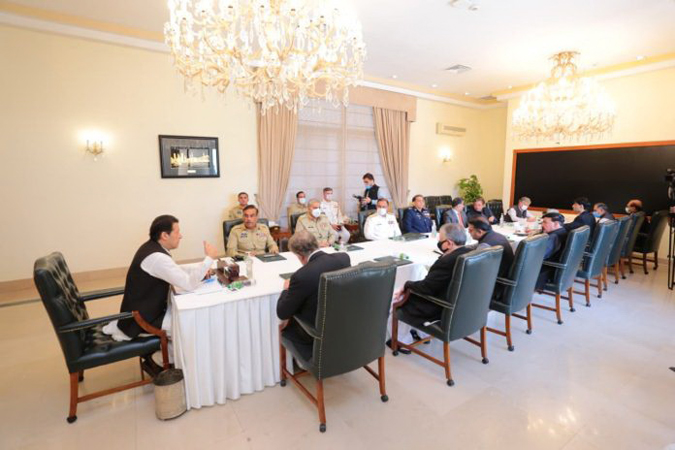 The National Security Committee (NSC) in its 34th meeting on Friday with Prime Minister Imran Khan in the chair reiterated Pakistan’s commitment to a peaceful, stable and sovereign Afghanistan.

The NSC meeting convened to discuss the ongoing situation in Afghanistan was attended by relevant federal cabinet members, all services chiefs, and heads of intelligence services.

The prime minister received a detailed briefing on the evolving regional security situation, particularly the recent developments in Afghanistan and their possible impact on Pakistan. The participants noted, with concern, the dire humanitarian situation in Afghanistan and emphasized the urgent need for the international community to provide assistance to avert a humanitarian crisis.

The importance of international coordination on constructive political and economic engagement with the interim government in Afghanistan was also highlighted, a press release issued by the PM Media Office here said.

The prime minister expressed satisfaction on Pakistan’s support to the international evacuation effort from Afghanistan and noted that the entire world had recognized Pakistan’s positive contribution. The committee members emphasized that the evolving situation in the region was extremely complex and that any instability in Afghanistan could have severe implications for Pakistan.

Agreeing with this view, the prime minister stressed the need for a coordinated policy effort. He directed the establishment of a dedicated cell to synergize various streams of efforts on Afghanistan across the government, including international coordination for humanitarian assistance and effective border management to prevent any negative spillover into Pakistan.

Following the meeting, Minister for Interior Sheikh Rasheed held a press conference to brief the media on what was discussed. Rasheed said that the meeting was attended by Chief of Army Staff Gen Qamar Javed Bajwa, Chief of the Naval Staff Admiral Amjad Khan Niazi and Chief of the Air Staff Air Chief Marshal Zaheer Ahmed Baber Sidhu. He added that Director General Inter-Services Intelligence (ISI) Lieutenant General Faiz Hameed was present at the meeting.

According to the interior minister, border management formed part of the discussion, besides all issues pertaining to the current situation of the country. “All national issues were discussed in detail. The Afghanistan issue was also discussed. But none of those things can be talked about publicly,” he said.

Prior to the release of the photograph and video footage of the meeting, when Rashid was asked whether the meeting was attended by Lt Gen Faiz Hameed as the ISI chief or if the recently named Lt Gen Nadeem Ahmed Anjum was in attendance, the minister said, “[The change of command] will take 8-10 days.” It was further confirmed that the outgoing DG ISI attended the meeting.

Separately, Prime Minister Imran Khan Friday asked the members of national and provincial assemblies and Senators to ensure resolution of problems of people in their relevant constituencies. During the meeting with a delegation of legislators, he said party members and workers should celebrate the first week of Rabi ul Awal in their constituencies in a befitting manner. Events should be held to familiarize people about the life and teachings of Holy Prophet (PBUH), he urged.

MNA Makhdoom Zain Hussain Qureshi belonging to Multan called on Prime Minister Imran Khan here on Friday. During the meeting matters relating to his constituency and the ongoing development projects were discussed.

MNA Ahmad Hussain Dehar belonging to Multan called on Prime Minister Imran Khan here on Friday. During the meeting matters relating to his constituency and the ongoing development projects were discussed.