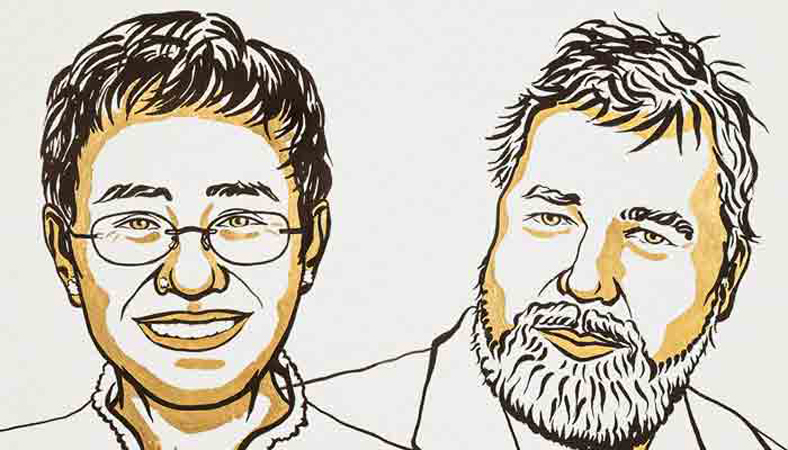 Investigative journalists Maria Ressa of the Philippines and Dmitry Muratov of Russia won the Nobel Peace Prize on Friday for their work promoting freedom of expression at a time when liberty of the press is increasingly under threat.

Ressa, also a US citizen, is co-founder of Rappler, a digital media company for investigative journalism. Muratov is a co-founder of Russia’s leading independent newspaper Novaya Gazeta. The pair were honoured “for their efforts to safeguard freedom of expression, which is a precondition for democracy and lasting peace,” said the chairwoman of the Norwegian Nobel Committee, Berit Reiss-Andersen.

“They are representatives of all journalists who stand up for this ideal in a world in which democracy and freedom of the press face increasingly adverse conditions,” she said.

Ressa, 58, the only woman to win a Nobel so far this year, said the prize shows that “nothing is possible without facts”, referring to the links between democracy and freedom of expression.

“A world without facts means a world without truth and trust,” the outspoken critic of Philippines President Rodrigo Duterte told a livestreamed interview with Rappler.

She told Norwegian TV2 the honour would give her and her colleagues “tremendous energy to continue the fight”.

Muratov dedicated his half of the prize to his newspaper’s six journalists and contributors killed since 2000, who include the prominent investigative journalist Anna Politkovskaya.

“I can’t take credit for this. This is Novaya Gazeta’s,” he was cited by Russian news agency TASS as saying. The newspaper on Thursday commemorated 15 years since Politkovskaya’s killing. Muratov also said he would have given the award to jailed Kremlin critic Alexei Navalny.

The Kremlin meanwhile congratulated Muratov, with President Vladimir Putin’s spokesman Dmitry Peskov telling reporters: “He is talented. He is courageous.” UN Secretary-General Antonio Guterres called for a global effort to protect a free press. “No society can be free and fair without journalists who are able to investigate wrongdoing, bring information to citizens, hold leaders accountable and speak truth to power,” he said. Ressa and Rappler, which she co-founded in 2012 and heads, have faced multiple criminal charges and investigations after publishing stories critical of Duterte’s policies, including his bloody drug war.

The former CNN correspondent is on bail pending an appeal against a conviction last year in a cyber libel case, for which she faces up to six years in prison.

“The number of deaths is so high that the campaign resembles a war waged against the country’s own population,” Reiss-Andersen added.

Ressa and Rappler have also documented how social media is being used to spread fake news, harass opponents and manipulate public discourse. Time magazine named her a Person of the Year in 2018. Muratov, 59, has defended freedom of speech in Russia for decades, under increasingly challenging conditions. Novaya Gazeta, founded in 1993, is one of the few media outlets left voicing criticism of Putin. Muratov has served several times as chief editor since 1995.

Former Soviet leader Mikhail Gorbachev was one of the first investors, using part of his own 1990 Nobel Peace Prize winnings to fund it, according to the paper.

He said the prize was “good news” for the world’s press.

“This award raises the importance of the press in the modern world to great heights.” Novaya Gazeta’s opponents have responded with harassment, threats, violence and murder. “Despite the killings and threats, editor-in-chief Muratov has refused to abandon the newspaper’s independent policy,” Reiss-Andersen said. “He has consistently defended the right of journalists to write anything they want about whatever they want, as long as they comply with the professional and ethical standards of journalism.”

According to the latest rankings by Reporters Without Borders (RSF), the situation for press freedom is “difficult or very serious” in 73 percent of the 180 countries it evaluated, and “good or satisfactory” in only 27 percent.

According to RSF, 24 journalists have been killed since the beginning of the year, and 350 others are imprisoned.

From the murder of Saudi reporter Jamal Khashoggi in 2018 to the shutting of the pro-democracy Apple Daily in Hong Kong earlier this year, attempts to stifle the media abound. Against that background, media watchdogs had been tipped as contenders for the prestigious prize ahead of Friday’s announcement. The award’s image has been hit hard over the past years as one of its previous laureates, Ethiopian Prime Minister Abiy Ahmed, became embroiled in a war. Another, Myanmar’s Aung San Suu Kyi, was accused of defending the massacre of members of the Rohingya minority. The prize consists of a diploma, a gold medal and a cheque for 10 million kronor (980,000 euros, $1.1 million).