Gulf in characters mars ‘There’s Someone Inside Your House’ 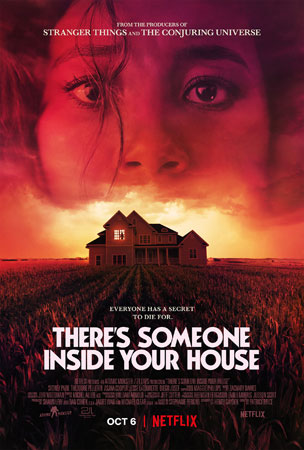 “This isn’t who I am! This isn’t… me … ?” are words to die by, as callous footballer Jackson (Markian Tarasiuk) learns at the start of the glossy teen slasher “There’s Someone Inside Your House.” Jackson’s the first of a few disposable victims, all of whom are stalked by a killer wearing 3-D printed masks that look just like his/her latest target. That’s a good enough prompt for a horror movie, especially one concerned with adolescent stuff like drugs, daddy issues, and dating.

There are also a few early scenes where the ensemble cast members, including a non-binary protagonist and a few 20-somethings of color, announce the filmmakers’ intentions: to address what it’s like to be a modern American teen. The rest of “There’s Someone Inside Your House,” which was adapted from Stephanie Perkins’ novel, doesn’t live up to that promise since much of the movie concerns the usual high school clichés about life in a post-Bruce Springsteen and post-Stephen King small town.

Jackson’s small town is Osborne, Kansas, where the locals enjoy the local high school’s football games with the same generic passion that they have for the town’s annual Halloween corn maze. Most of Osborne attends the game that Jackson should be playing in when he’s punished (to death) for a hazing ritual gone awry. That game, its audience, and the movie all stop dead in their tracks when everybody receives a mysterious text message with a video clip of Jackson and his buddies’ crime. Jackson’s transgression is somehow not the main focus of the movie, though openly gay quarterback Caleb (Burkely Duffield) does score a touchdown while everyone else looks at their phones.

Instead, “There’s Someone Inside Your House” skips from one adolescent protagonist to the next as they take turns announcing their concerns through soundbite-friendly dialogue, and are then stalked (also fatally) in well-lit master shots by a murderer who, despite all this, wants their victims to dig deeper, and really be honest with themselves. Hence the masks, because “You are all wearing masks,” I guess. There’s also a tidy explanation later on about the killer’s real motive-spoiler alert: it’s about “privilege”-but that doesn’t really explain why most of Osborne’s tokenized POCs and queer-identifying characters are as bland as their white, straight counterparts.

Sparks do not fly between sassy Alex (Asjha Cooper), “the bitch” of the group, and her crush, shy Rodrigo (Diego Josef), nor is there much to keep viewers invested in girl next door Makani (Sydney Park) and her cigarette-smoking love interest Ollie (Theodore Pellerin).

A relentless paint-by-numbers plot keeps these two couples from developing memorable personalities since we’re always either cutting away to the next sub-plot-rich kid Zach (Dale Whibley) hates his intolerant politician dad (William MacDonald)-or the next red herring (don’t kiss each other too deep, kids, there’s someone at the door!). Eventually, these standard evasive maneuvers start to feel like the point of this story instead of the usual means to a familiar end.

Still, the most frustrating thing about “There’s Someone Inside Your House” has to be the gulf between its characters’ stated qualities and their actual behavior. Chipper and cruel student council leader Katie (Sarah Dugdale) gets stalked and dispatched in an early kill scene set in a church, which suggests that the filmmakers are more interested in plot twists than character development. And honestly, Katie’s not much more of a character than, say, Makani, whose main appeal stems from her barely considered past.

Makani spends much of the movie walking on eggshells, trying to distance herself from a revealing trauma, but also keeping her and Ollie’s relationship something of a secret (though they make out in his car a couple of times). Park’s certainly charismatic enough to carry her scenes, and for a while it’s easy to follow Makani as she struggles to keep a low profile. But there’s not much to Makani beyond Park’s suggestive performance, least of all Makani’s threadbare and mostly implied relationship with her sleepwalking grandma (BJ Harrison), or her cute, but unremarkable thing with Ollie.

Like Katie, Makani pushes the plot further along, and gives a little more weight to a story outline that never stops telling you what it’s about: a varied community of alienated teenagers, defined as they supposedly are by their ability to choose when and what they can share about themselves. Too bad all the haves are mustache-twirling caricatures and all the have-nots are indistinct place-holders.

Maybe this is a product of the movie’s nature as an adaptation, but there’s never really a moment in “There’s Someone Inside Your House” that suggests its protagonists are real enough to be worth rooting for.

They talk a lot about hiding their true selves from each other, but often don’t seem human enough to be credibly shallow.