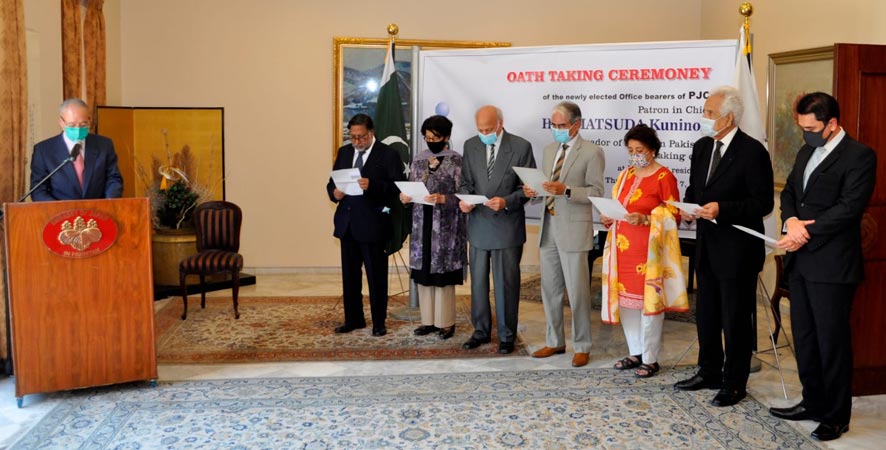 An oath taking ceremony to this effect was held at the official residence of the Ambassador, with a limited number of attendees as a precaution against the coronavirus pandemic, said a press release.

Justice (R) Ali Nawaz Chohan has been unanimously elected as the new President of Pakistan-Japan Cultural Association (PJCA) Islamabad by the members of its executive committee where as Mrs. ORITA Toshiko and Prof. Dr. Nusrat Ara Majeed were elected as Vice Presidents.

Ambassador MATSUDA, while speaking on the occasion, congratulated the newly elected office-bearers of PJCA Islamabad and expressed his good wishes for their future endeavors to further deepen the cultural interactions and most importantly people-to-people contacts between Japan and Pakistan.

“The friendship between our two nations is based on mutual trust, cooperation and understanding. I believe that cultural relationship, in particular, can significantly contribute to further deepen the existing mutual trust and understanding between Japan and Pakistan”, said the Ambassador.

He expressed his hope that PJCA and other such organizations in Pakistan would step forward and join the Embassy of Japan to commemorate the 70th anniversary of establishment of diplomatic relations between Japan and Pakistan next year in a befitting way.

Justice (R) Ali Nawaz Chohan, the newly-elected President of PJCA Islamabad, while expressing his views on the occasion, thanked the Ambassador for taking time to grace the oath taking ceremony of the recently elected executive committee members of the association.

While assuring his association’s cooperation to further strengthening the cultural relations between the two countries, he stated that the new team of PJCA Islamabad will do its best to promote the cultural ties between Pakistan and Japan with close cooperation of the Embassy of Japan in Pakistan.

Since PJCA Islamabad was formally inaugurated in 1972, the organization has been playing an important role in the promotion of friendship and cultural relations between Japan and Pakistan.