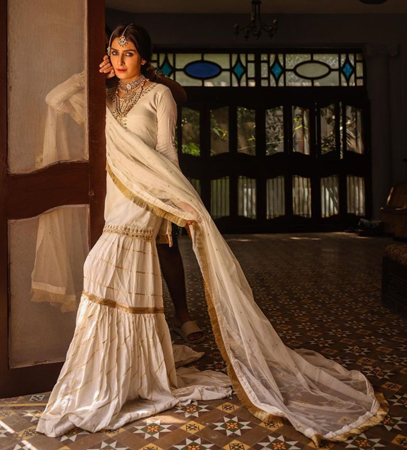 Actress Ayeza Khan recreating Indian veteran actress Rekha Ji’s iconic look from the popular hit Bollywood song ‘Salame Ishq Meri Jaan. She shared the look on her Instagram handle where the actress managed to grab a lot of appreciation. The actress is currently acting for drama serial ‘Lapata.’ She created various iconic looks as her role in the serial demanded such and entertained her fans with her acting skills. In the pictures, Ayeza can be seen wearing a traditional white and gold embroidered dress with elegant heavy jewellery and subtle makeup as she looks super chic in this jaw-dropping ensemble. Fans have praised the actress for her unique role in the drama serial.