* The train was briefly stopped by three Belgian resistance fighters in Boortmeerbeek, 30 kilometres northeast of Brussels 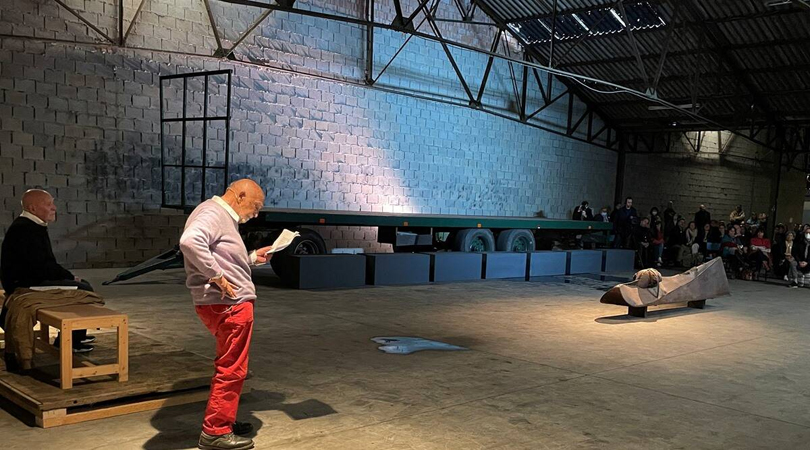 In a rundown old factory in Belgium, Holocaust survivor Simon Gronowski celebrated his upcoming 90th birthday on Sunday by starring in an opera inspired by his life – a history of love, faith and forgiveness overcoming the darkest tragedy. Gronowski was 11 years old and living Brussels when in 1943 Nazis put him, his mother and sister on a train bound for Auschwitz, the infamous death camp in Nazi-occupied Poland.

The train was briefly stopped by three Belgian resistance fighters in Boortmeerbeek, 30 kilometres northeast of Brussels. In the ensuing chaos, Gronowski jumped off. He went on to survive World War Two in hiding. His family perished at Auschwitz, where more than 1 million people, mostly Jews, were killed.

Having been a much-loved child gave Gronowski the strength to overcome his tragedy, he said. In honour of his cherished sister, who was good at classical music and loved jazz, he became a jazz pianist, on top of his career as a lawyer.

After keeping quiet for decades about his past, Gronowski decided in the 2000s to write a memoir.

That led to a meeting in 2012 with Koenraad Tinel, the son of Flemish Nazis whose brother had served as the prison guard of Gronowski’s family.

“The children of the Nazis are not guilty,” Gronowski recounted telling Tinel. “He had the guilt of his father on his shoulders, he felt guilty. These words I said were important to him because they came from a victim of the Nazis.”

“Our pain is not the same. But I understood his pain. And now he is more than a friend. He is my brother.”

ODE TO LOVE — nearly 80 years since the fateful events, Gronowski’s back is hunched with age and he can’t stand for long. But his vivid eyes, quick smile and gestures give him the air of someone much younger as he talks of his life marked by the horrors of the Holocaust, which has also been turned into an ode to love of humanity.

British composer Howard Moody was so inspired by Gronowski’s story after meeting him at a theatre performance several years ago that he wrote an opera based on Gronowski’s life and his extraordinary friendship with Tenel.

The opera, “PUSH”, has been performed several times in Belgium and the UK, but to mark Gronowski’s 90th birthday on Oct. 12, Moody put on a special performance on Sunday in which both Gronowski and Tenel appeared, playing themselves.

The performance was staged in an old furniture factory near Boortmeerbeek, where Gronowski jumped off the train nearly 80 ears ago, to a rapturous reception from an audience of 300.

PUSH mixes classic arias with jazz inserts and choral singing. In one grand scene set on the deck of a train carriage, the choir – collectively impersonating Gronowski’s mother – pushes little Simon off the convoy. “That’s not something to be light or easy about. One has to give a sense of awareness about what happened and why it happened,” said Moody.

“But also this wonderful positivity that he has in his spirit, which is so inspiring. This touched me as much as the pain of his story.” Later in the play, a Nazi guard kneels, begging for forgiveness in a powerful aria to which the main protagonist replies in soft, high tones: “I forgive you.”

Gronowski said the opera advocates peace, tolerance and democracy. While the past could not be undone, the story carries a prescient message, according to Tinel.

“It is important today because this story repeats itself non-stop all over the world,” Tinel said. “We have to keep on giving testimony.”

Between their scenes, the duo rested on a bench on the stage, touching affectionately and at times wiping away tears. In the grand finale they embraced each other as they stood with members of the choir singing a piece echoing Gronowski’s motto. “Despite the past, I believe in the power of human goodness,” they sang as members of the audience, some also welling up, gave a long standing ovation.