* Asad Umer says Chinese debt is around 10% of Pakistan's total loans, while it is 26% of total external debts
* Details of loans related to CPEC shared with IMF 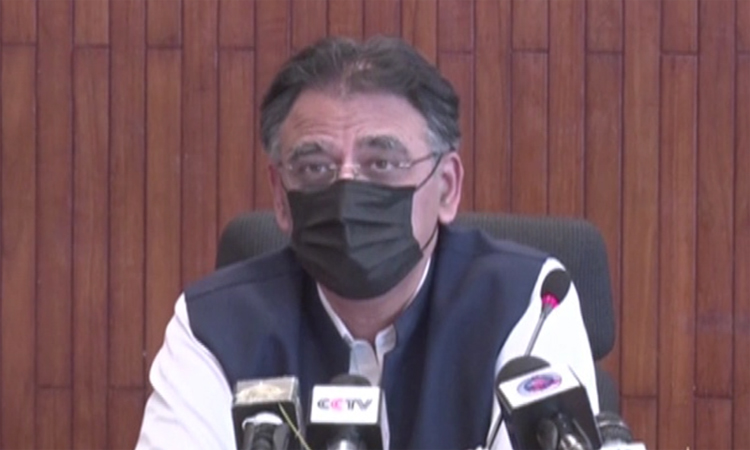 Minister for Planning, Development and Special Initiatives Asad Umar on Wednesday urged the media to foil the international unjustified campaign against China Pakistan Economic Corridor (CPEC) instead of becoming part of it.

Addressing a press conference flanked by Special Assistant to Prime Minister on CPEC Khalid Mansoor here, the minister said today was the era of 5th generation hybrid warfare when the enemy was utilizing new tools to flop the opponent’s projects. “We are witnessing the international campaign against our national project under which false and baseless news are being disseminated to reverse the progress,” he said, adding, “This campaign is understandable but it is quite nonsense that our local media is also becoming part of it deliberately or unintentionally by quoting the Western media’s report against CPEC”.

Referring to some news reports published in local media which quoted a US think tank’s report that many information with regards to CPEC were being kept secret, the minister said each and every thing about the project is public. Asad Umar said the concerned authorities were bound to tell all the required information to the parliament and the parliamentary committees besides, all information about tariff structure of the energy projects under CPEC were also available on the website of National Electric Power Regulatory Authority (NEPRA). He told that the International Monetary Fund (IMF) also asked for information about the projects under CPEC which were provided by the government of Pakistan.

He said the government of Pakistan gives sovereign guarantee to all the foreign funded projects and all the independent power producers (IPPs) whether they were from China, US or any other country were given sovereign guarantee by the Pakistan government. With respect to financing cost of CPEC energy projects, the minister informed that the average rate of loans for the private sector projects under CPEC was around LIBOR (London Interbank Offered Rate) plus 4.25 percent while for the projects owned by the government, the average interest rate was about 2.4 percent.

There are many projects that are executed through the Chinese government’s grant so if we include the amount of grant, then the average interest rate turns to even less than 2%,” he added. He said the Chinese loans were even cheaper than those executed by the other international lending agencies such as International Finance Commission (IFC), Asian Development Bank (ADB), German lending agency and other Western agencies.

Asad Umar said the return of loan period was 20 years with a grace period of five years. He informed that the Chinese debt was around 10 percent of Pakistan’s total loans while it was 26 percent of the external debts. “So the argument that the Chinese debt would create trouble for Pakistan is not correct. It is no doubt that Pakistan is facing debt sustainability challenges but these challenges were not related to China,” he added.

The minister said the conditions offered by Pakistan to install power plants were not only for China but for all countries, adding, only China responded to the conditions. To a question the minister said, “We have already provided details with proofs that work on CPEC was done more rapidly during last three years than the previous tenures”.

Khalid Mansoor said when work on Thar coal power project was initiated, no one other than China was ready to invest in this project. He said the mismanagement in the conditions of the projects was committed by then Pakistan government which should not be linked to China.