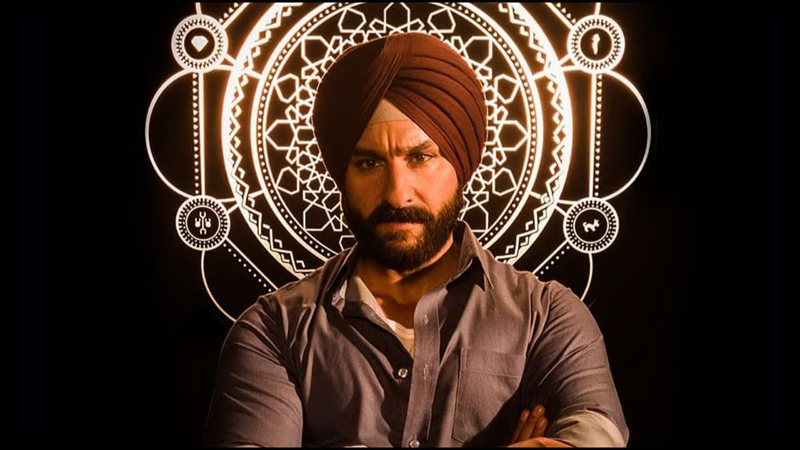 Saif Ali Khan has been given a lot of sobriquets in his career – the other Khan and the fourth Khan being just the two of them.

The actor, however, is not bothered by any of it. Saif is on a different trajectory and perhaps enjoying the most fulfilling time in his Bollywood career. “I’ve never seen the point of doing that,” he says referring to the competition. “I’m way more successful than I thought I’d ever be. And I’m just happy.” The versatile actor claims to be at a position in his career where he can afford to play characters “as crazily and interestingly” as he can without any fear.

Saif Ali Khan has carved a niche and found his comfort zone with the kind of cinema he’s been associated with in the recent years. These include projects as varied as Go Goa Gone, Kaalakaandi, Laal Kaptaan, and his recent hit Bhoot Police.

“There’s some kind of lack of fear that leads to nice things. I think I’m at a good stage of my career where I’m still enjoying and learning about my work. I have people like Al Pacino as my gurus. He’s my standard of good acting. And I’m still a struggling newcomer. That’s how I see it. But I’m enjoying being one,” Saif said in an exclusive chat with indianexpress.com.

From catching zombies in Go Goa Gone to catching ghosts in Bhoot Police, it’s been an interesting turn of events for Saif. Looking back at the progression, he says with a smile, “Go Goa Gone was made in a very independent film spirit. I literally didn’t get paid for it and they said it is a very bad idea, you shouldn’t be making films like this. But we did and got appreciated. So I think film history is full of stories about crazy people wanting to tell stories, and finding love finally.”

Saif’s character of a ghostbuster in Bhoot Police named Vibhooti received much praise for his punchlines and comic timing. Comparing both the movies, Saif agreed that it’s been a progression towards “coming into the mainstream.”

“Bhoot Police was a more commercial idea, much rooted in Indian culture. It’s a script and a character I was crazy about right from the start. In fact it’s quite toned down. If we make a sequel, which we are planning to, I’d suggest to the writer to bring in some stuff from the old drafts. Contrary to this, Go Goa Gone was a little niche. For me it’s always about how to entertain the audience. Like I saw The Mummy with my wife and son. When you snuggle up while seeing something bit frightening, it’s a warm feeling. And I think that’s the zone of Bhoot Police.”

Saif revealed that his second son Taimur Ali Khan enjoyed Bhoot Police despite the scary portions. He added, “Taimur has seen me being excited about the film. He wondered why I came home with that kind of makeup on. He knew what the film was about. Bhoot Police is actually more funny than it is scary. It would be nice if we can make child-friendly supernatural adventure comedies. That should be the genre!”

In a career spanning nearly three decades, Saif Ali Khan has more than once been referred to as the “fourth Khan”. He’s even done second-third lead films like Main Khiladi Tu Anari, Dil Chahta Hai and Kal Ho Naa Ho, until Omkara turned the tables for him in 2006. “Dil Chahta Hai was the third lead. You never know what people will like. I see those songs which Katrina and I did. You have a different energy in your 30s and luckily it worked out. I wanted to do Omkara and things like this. Now the choices are doing something commercial and interesting, along with finding a reality in the performance. Just have the clarity whether you can carry an entire film or not and be brave to choose a path.”

Saif was the first big Bollywood star to take the OTT route with Sacred Games. This was even before the Indian audience got used to the streaming platforms. He was also seen in Tandav earlier this year. Sharing his take on how he saw the digital space, Saif said he didn’t enter the web because he wanted to be the first. “It’s because I didn’t have that fear of ‘oh is it television or the small screen.’ I understood early that Netflix is a revolutionary idea. Small scale entertainment is less valuable than big screen. Netflix internationally is capable of putting more money into a project than a lot of films, because they want to change that idea. A kid with a phone can have a cinematic experience that’s more intense than a bunch of guys in the theatre. And that’s a crazy idea, that’s what Netflix was trying to achieve, challenge the notion of people.”

Calling Sacred Games “the best and most adventurous piece of writing” he’s ever been involved with, Saif picked a scene between Kubbra Sait’s character Kukoo and Nawazuddin Siddiqui’s Ganesh Gaitonde and said, “When Kukoo reveals her gender to Gaitonde, that scene is so disturbing and lovely. I’ve never seen anything like this in international cinema. I think that’s why we were nominated for an Emmy.”

Does that mean Saif doesn’t take the “superstar” tag too seriously? Dissecting his definition of a superstar, Saif opined, “My parents were superstars but they didn’t behave like that. And it’s very easy to take yourself too seriously, whether it’s about having a bunch of bodyguards around or that vibe. You can’t blame somebody who doesn’t know any better. You just don’t have to get carried away by success.”

Being the son of yesteryear diva Sharmila Tagore and legendary cricketer Mansoor Ali Khan, Saif was initially pushed into a bracket with the burden of carrying forward his legacy. He said the primary thing any actor wants to do while entering the showbiz, is to survive and “don’t want to be laughed at”. And he was no different. He explained, “You don’t want people abusing you or throwing chappals at you at Gaiety Galaxy. That’s why you come in the movie industry. I didn’t have the mental approach like my contemporaries. Some were reigning superstars, some are superstars from their first film till now. My doing well or audience liking me has been a mirror reaction to my mental state. I have a very international perspective on things because of my upbringing and education. And a westernised anglicised approach is an opposite of a Hindi film hero. They are not very macho. They are soft spoken. It was a different standard. That was not really settling to me.”

Saif’s choices might be a reference point for many new age actors, but he said he didn’t take himself too seriously back then. It however still worked. “When I watch my old films, I think there was a likability. I was trying. You could see there was a lack of inhibition, a decent attractive quality. But I chose the best from what was offered. This was also bread and butter for me.”

Saif also revealed excitement about his upcoming mythological project, Adipurush, where he plays Lankesh against Prabhas’ Ram. Adipurush is his second costume drama with director Om Raut, after the historical Tanhaji.

“I think Adipurush will be part of cinematic history. And I think Om Raut is K Asif reborn! He’s absolutely passionately insane. But it’s also exhausting with people doing your beard, five people touching you all the time, fiddling with your costume. Sometimes you’re like a piece of meat in front of the camera. I would love to do a film like Vikram Vedha where I can just look like a normal guy. I can’t wait for something like that,” he concluded.

Saif will also be seen in Bunty Aur Babli 2 that’s set to have a digital premiere on Disney Plus Hotstar November 19.