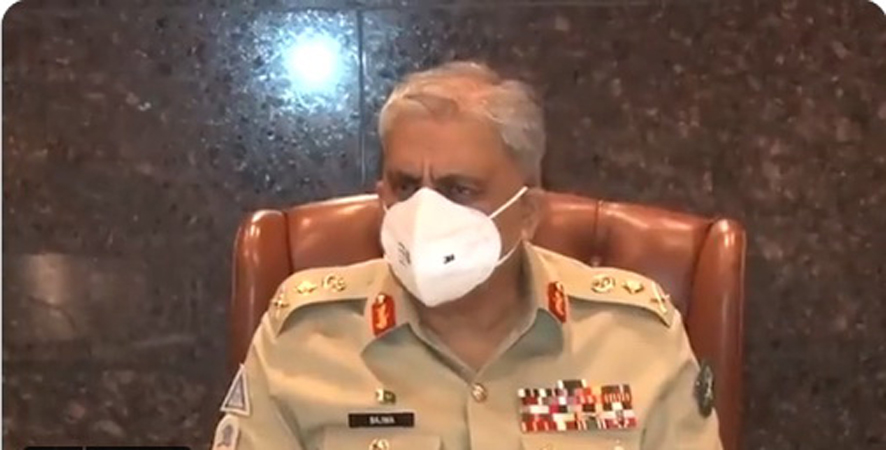 Speaking on the occasion, the army chief said the baseless propaganda only reflected their (Indian military) frustration and an attempt to divert attention from their internal contradictions especially gross human rights violations being committed in Indian Illegally Occupied Jammu and Kashmir (IIOJK).

The forum took comprehensive review of evolving security situation in the region with particular focus on border management and internal security. The forum was apprised on measures being taken to thwart nefarious designs of inimical forces to destabilise Pakistan and spoil the hard earned peace and stability. The forum expressed concern over the brewing humanitarian-cum-security situation in Afghanistan, concluding that meaningful engagement and sustained support by international community was imperative for paving way for peace and stability in Afghanistan and the larger region.

The COAS appreciated operational preparedness of formations and focus on training including enhanced collaboration with foreign militaries and conduct of joint exercises in the operational and counter-terrorism domain.

Separately, Chief of Army Staff (COAS) General Qamar Javed Bajwa Tuesday said there was no cause more noble than laying one’s life for defence of motherland and sacrifices of our martyrs would not go waste.

The army chief was addressing at an investiture ceremony to confer military awards to army personnel for their acts of valour and gallantry held here at General Headquarters (GHQ), said an ISPR media release.

General Bajwa conferred military awards on army personnel for their acts of gallantry during operations and meritorious services rendered to the nation.

Paying rich tribute to martyrs and ghazis, the COAS said, “We owe peace and stability of our country to the selfless devotion and sacrifices of these officers and soldiers who are our real heroes.” He lauded brave families of “Shuhada” for supreme sacrifices they rendered for the country.

Medals of Shuhada were received by their family members. A large number of senior army officers and families of awardees attended the ceremony.

During the meeting, matters of mutual interest, regional security situation and cooperation in military and maritime domains were discussed, said an ISPR media release.

The COAS reiterated that both countries shared great history of cordial relations and deep rooted spirit of brotherhood, which had transformed into an enduring partnership. The current situation in Afghanistan and its bearing on regional peace and stability also came under discussion.

The visiting dignitary appreciated Pakistan’s role in Afghan situation, specially the assistance in successful evacuation operations and pledged to continue working with Pakistan for regional peace.