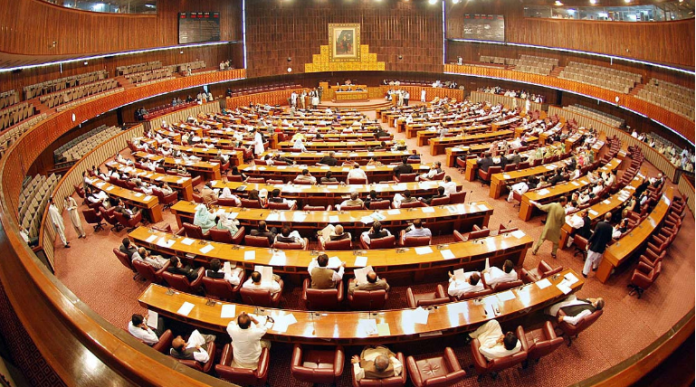 ISLAMABAD: Minister for Information and Broadcasting Chaudhry Fawad Hussain on Monday told the committee concerned of Senate that a proposal had been finalized to charge private television channels for the live telecast of the Parliament proceedings.

The private TV channels would have to pay for showing contents of the PTV Parliament so that the state-owned channel could be run on a sustainable model through income generation, he said in the Senate Standing Committee on Information and Broadcasting’s meeting presided over by Senator Faisal Javed Khan. Fawad also asked the committee to propose whether the Parliament should bear the expenses of showing live proceedings of parliament. He also gave an example of the British Broadcasting Corporation which had been charging 100 pounds for its services.

Some channels of the PTV were already operational under public-private partnership and producing positive results, he said while citing an example of the PTV home which generated a profit of over Rs one billion by outsourcing 26 dramas that were purchased with an amount of over Rs 180 million. About the jump in the profit of PTV sports, he said it was earning up to Rs 500 million per annum before opting to the public-private partnership, but now it had reached Rs 800 million this year after the initiative.

PTV sports’ stream would be transformed into HD within the next three months, he added. To a query, the minister said the PTV Parliament would continue showing live proceedings of the parliament sessions if both the houses were in session by shifting live streaming one of them to the Youtube channel of the state-run channel. A dedicated channel of PTV for kids would be launched soon, he informed the forum. Within the next six to eight months period, a sustainable model of human resource management would be in place in the PTV, he said, adding the management was striving to hire highly qualified professionals by avoiding political interference in human resource management of the state-owned asset.

The minister said the Pakistan Television Corporation (PTV) had earned a profit amounting to Rs 1.3 billion this year due to prudent business model introduced by the government of Pakistan Tehreek-e-Insaf (PTI). The PTV was giving due coverage to opposition leaders of both the houses including Shehbaz Sharif, he said in response to another query.
Fawad said the pension dues of retired PTV employees had been paid.

About the proposal of increasing TV fee from Rs 35 to Rs 100, the minister said he himself had rejected the idea of further burdening the taxpayers. “I want the channel to run the affairs on its own,” he added. In case of waiver of TV fee, he said the streaming of PTV channels in seven languages including Kashmiri, Balochi, Seraiki and others might come to halt. It would also had impact on 200 FMs operational across the country.

Different Power Distribution Companies (DISCOs) owed some Rs 4 billion to PTV out of a total amount of Rs 7 billion (per annum), he said while answering another query. Fawad said the Ministry of Information and Broadcasting and attached departments had properties worth over one trillion rupees. The services of a consultant were being hired to collect the details of buildings and properties, he added.

He said from the year 2008 to 2018, a large number of people were inducted into state-owned entities including Pakistan Steel Mills, Pakistan International Airlines, and others. Out of the total inducted people, he added, the qualification of over 80 percent of employees was matric and FA.

The country has a total income of Rs 6,000 billion, out of which 59 percent was transferred to provinces under National Finance Commission Award, he said, adding an amount of Rs 1700 billion spent on defence while Rs 2,200 spent on payment of interest accumulated on the loans taken by the previous governments. The committee was informed by the PTV management that the tenders for reevaluation of the properties of PTV would be opened on October 6. Pakistan Broadcasting Corporation had also sought cabinet approval for commercialization of some of its properties, the committee further told.

The minister urged the opposition parties to evolve consensus on tightening the media laws so that fake news could be dealt with in an effective way. The maximum propaganda of fake news was against politicians, bureaucrats, and businessmen, he added. The committee expressed its indignation over the whopping disparity in the salaries of different employees of PTV.

Senator Irfan Siddique said the salaries of some 75 daily wagers had been same despite the passage of several years. Senator Faisal Javed directed PTV management to submit details of the human resources of PTV which should be rationalized at the earliest. There should not be a disparity in salaries, he added. The committee deferred deliberations on the Bill titled “The Right of Access to Information (Amendment) Bill 2020 due to absence of the mover of the bill.