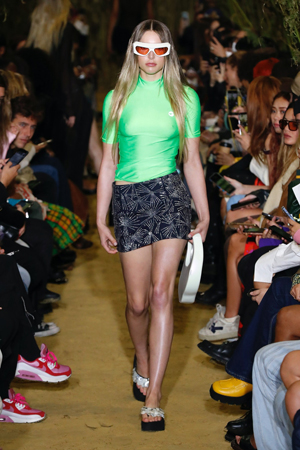 Steve Jobs’ youngest daughter Eve made her runway debut at Paris Fashion Week recently. The 23-year-old walked the ramp during Coperni’s Spring/Summer 2022 show. Eve wore a neon green spandex tee and a black crystal embellished skirt with a pair of white tinted shades. Her look was rounded off with a pair of platform flip flops and a white purse. Interestingly, one of Coperni’s accessories in his latest collection is a bag called Origami which is “inspired by the curving shape of the iPhone photo app icon”, reports Vogue. Eve walked alongside models like Gigi Hadid and Sdult Akech, according to Independent. Sharing a series of behind-the-scenes pictures, including a glimpse of her runway attire on Instagram, Eve wrote, “I can’t put into words how extraordinary this collection is. It was an honour to be apart of the vision @coperni.” Eve had previously appeared in an ad campaign in December last year for beauty brand Glossier. She is also an equestrian, who ranked number five on the list of the top 1000 riders under 25 worldwide in 2019, as per Horse Sport.