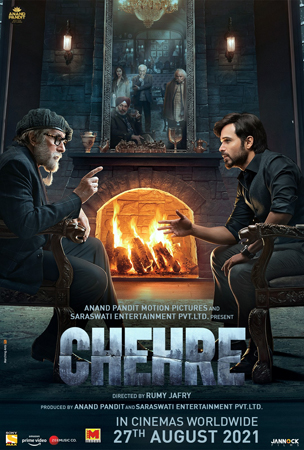 The film is now streaming on Amazon Prime Video across 240 countries and territories. The movie features megastar Amitabh Bachchan and Emraan Hashmi pitted against each other for the first time.

On Collaborating with Amazon Prime Video, Producer Anand Pandit said, “After receiving immense appreciation from the audiences for the theatrical release, we are delighted that our movie will now reach a wider audience through Amazon Prime Video. Chehre is a larger-than-life gripping thriller, brought to life with some of the most talented names in the Indian film industry. It is a perfect visual experience that will see Mr. Amitabh Bachchan face-off with Emraan Hashmi for the very first time. Right from the intriguing story, powerful dialogues, the unique casting to the global style music and locations, Chehre is indeed a perfect weekend watch to enjoy on your personal screen. We are happy to collaborate with Amazon Prime Video and showcase the mystery thriller to the audience.” Sharing happiness over the film’s release on Amazon Prime Video, Director Rumy Jafry shared, “I am delighted that the movie is now streaming on Amazon Prime Video. Chehre is a power-packed thriller showcasing phenomenal ensemble actors from the entertainment industry, the movie narrates a story of polarised individuals fighting for justice against one crime. In the film, the audience will experience the ‘verbal conflict’ between Mr. Bachchan and Emraan. We hope the gripping mystery thriller will keep the audience guessing and engaged from the first scene.”