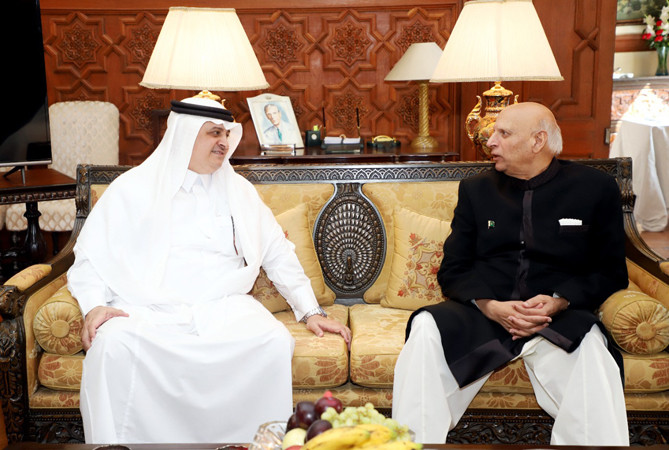 Ambassador of Saudi Arabia Nawaf bin Said Al-Malki called on Punjab Governor Chaudhry Mohammad Sarwar at Governor’s House in Lahore on Friday. Pak-Saudi relations and other issues of mutual interest were discussed during the meeting. The Saudi ambassador announced scholarships for 600 Pakistani students in 25 different universities of his country. The governor thanked the Saudi government and the ambassador for the historic initiative of scholarships.

Chaudhry Sarwar termed Pak-Saudi relations very strong and said that respect for the custodians of the Two Holy Mosques was obligatory on every Muslim. He said that Saudis and Pakistanis were brothers, adding that Pak-Saudi relations were deep and historic. The governor said Pakistanis had a long-lasting spiritual attachment with Saudi Arabia and the hearts of both beat together. He said, “Saudi Arabia always stood with Pakistan in difficult times, for which we thank the Saudi leadership.” He said that Pakistan would always stand by Saudi Arabia to protect its integrity and sovereignty. He added that the extent to which Pak-Saudi relations had flourished under the leadership of Prime Minister Imran Khan was unprecedented.

Saudi Ambassador Nawaf bin Said Al-Malki termed the relations between Riyadh and Islamabad like those of two brothers and said that Saudi Arabia had never left Pakistan alone before and it would not leave it in future as well. “We consider Pakistan as our home and will play our role in its development; Saudi Arabia stands with Pakistan for development, stability and peace,” he added.