US proposed bill an attempt to ‘pass the buck’: FM 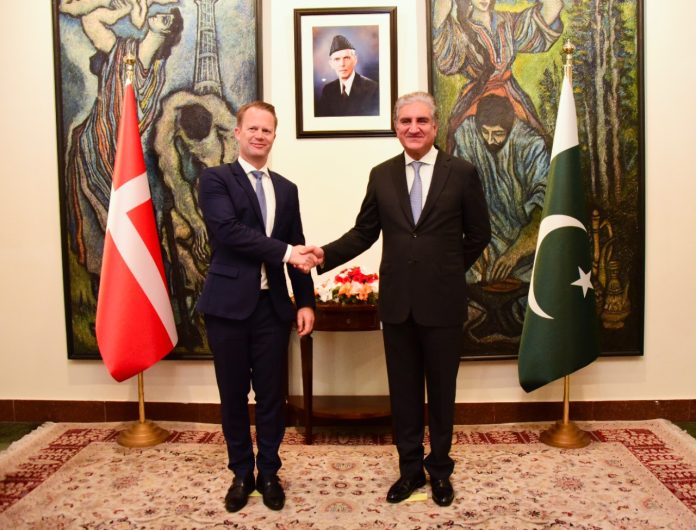 ISLAMABAD: Foreign Minister Shah Mahmood Qureshi on Friday said the recent proposed bill moved in the US Senate seeking Pakistan’s role in the present Afghanistan situation was “an attempt to pass on the buck” and stressed that Pakistan had sufficient reasons to defend the course.

“Pakistan will protect its interests and defend its position. The US has to understand the role played by Pakistan in facilitating the peace process,” Qureshi said at a joint presser with the visiting foreign minister of Denmark Jeppe Kofod.

He was responding to a question over the recent bill presented in the US Senate that sought to assess Pakistan’s role before and after the fall of Kabul to the reigns of the Afghan Taliban. The foreign minister said “scape-goating Pakistan would in fact mean overlooking the ground realities”.

Qureshi said Pakistan would not ignore the implications of the proposed bill on Pakistan, adding that “we are cognizant and can explain”. He pointed out that the bill did not have a bipartisan understanding over it and was presented by a group of Republican senators, who were even critical of some US policies and were also against the US withdrawal from Afghanistan.

“Let us not be excessively obsessed with the bill. There are lobbies in the US and our neighbors in the region who would like to play it up,” he said. The two foreign ministers, who earlier led the delegation-level talks, said the interaction was held in a positive manner with a focus on renewing the bilateral ties.

He welcomed the signing of the Green Partnership agreement with Denmark, which he said would give Pakistan an opportunity to make improvements in the sector. He mentioned that Denmark had included Pakistan in the Danish Energy Transition Initiative.

On Afghanistan, he said, the Danish foreign minister was briefed about Pakistan’s facilitatory role in the peace process. Qureshi mentioned taking up with his Danish counterpart the matter of visa categorization for Pakistan, with a request to revise the travel advisory.

He thanked the government of Denmark for its support on GSP Plus status for Pakistan. He said he apprised the Danish FM of the concrete steps taken by Pakistan in the Financial Action Task Force (FATF) and on how Denmark could play its role in getting Pakistan out of the grey list.

The Danish Foreign Minister to a question about recognition of the government of Islamic Emirate of Afghanistan said “we are not going to recognize the Taliban government.”. He said his country would be looking to see whether the Taliban match their words with their deeds on several issues; including protection of women and minority rights.

He however, noted that helping the Afghans was also of paramount importance to ensure that there was no humanitarian crisis. He said his government had allocated US 80 million dollars in 2021 for humanitarian assistance.

“We will judge the government in Kabul , not only on the words; whether it acts as responsible to the international community.” He said he was pleased to undertake the visit to Pakistan and pointed that it was the first visit of a Danish FM in ten years.

FM Kofod said he had a “comprehensive and open discussion” with FM Qureshi  and the two countries shared several interests and were keen to find their solution to issues. He also conveyed his gratitude for the “rapid and efficient evacuation” for the Danish personnel stuck in Afghanistan, and in particular thanked the staff at the Islamabad airport  that assisted in bringing the people from Kabul.

He said the two sides discussed in detail the Afghanistan situation and deep concerns were expressed on the safe havens of terrorists in Afghanistan. He pointed out that Pakistan was a very important country in the region.

He noted that Pakistan and Denmark enjoyed 70 years of diplomatic ties and were working together for climate change, sustainable trade and renewable energy. He said his country was considering employing more staff at their embassy in Pakistan for undertaking projects relating to energy cooperation.

He also lauded Pakistan for his drive to plant trees and for the protection of the environment. He said Pakistan was important for the stability and security of the region and Afghanistan.

“We need to work together,” he stressed and said his country has keen interest in regional stability. “We will not turn away from the situation … so that Afghanistan does not turn into a haven of terrorists.”

When questioned about the gross human rights violations in Jammu and Kashmir, the Danish Foreign Minister said his country supported a “peaceful diplomatic dialogue … this is what we want to see and respect,” he added.