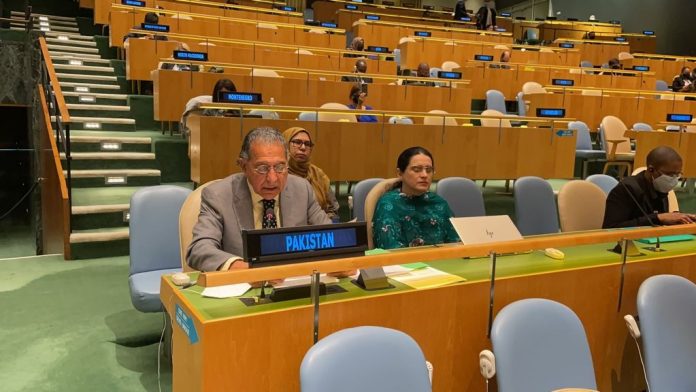 UNITED NATIONS: Deploring India’s “state terrorism” unleashed in Jammu and Kashmir, Pakistan on Thursday called for the implementation of U.N.Security Council resolutions prescribing a plebiscite to enable the Kashmiri people to exercise their right to self-determination.

Speaking in a UN panel, Ambassador Munir said that India has, by “obfuscation, oppression and intransigence”, denied the right of self-determination to the people of Jammu and Kashmir for seven decades.

In his remarks, the Pakistani envoy also urged the world community to demand that India halts its human rights violations in disputed territory and allows an international inquiry commission to probe those abuses.

“High sounding proclamations of the need to respect human rights ring hollow and hypocritical if situations of grave and consistent violations, such as in occupied Jammu and Kashmir, are not effectively addressed by the international community,” Ambassador Akram told the General Assembly’s Third Committee, which deals with social, humanitarian and cultural issues.

Since then, he said India imprisoned the entire Kashmiri political leadership; illegally detained 13,000 Kashmiri youth; tortured many of them; extra-judicially killed hundreds of young Kashmiri boys; used rape as a weapon of war; put down peaceful protests violently, blinding even young children with pellet guns; imposed collective punishments, by demolishing and burning entire neighborhoods and villages; and curtailed the freedom of religion and expression.

“This reign of terror – this state terrorism – unleashed on innocent Kashmiris by India’s occupation forces, violate international human rights and humanitarian laws and constitute atrocity crimes, crimes against humanity and genocide,” Ambassador Akram told delegates from around the world.

“Due to officially proscribed impunity, not a single Indian soldier has been punished for these crimes,” he added.

Some 4.2 million Indian settlers have been issued domicile certificates to transform the Indian Illegally Occupied Kashmir (IIOJK) from a Muslim majority state into a Hindu majority territory, the Pakistani envoy said.

Dealing with racism, the Pakistani envoy said expressions of racial hatred, religious supremacy and violent nationalism had escalated in several parts of the world.

“Islamophobia is a pernicious manifestation of racism and hate which we must collectively combat,” Ambassador Akram said, noting that the Declaration on the 20th Anniversary Durban Conference has recognized Islamophobia as a contemporary form of racism, and also by the UN Global Counter Terrorism Strategy.

Prime Minister Imran Khan, he pointed out, has proposed that the UN Secretary-General convene a global dialogue on countering the rise of Islamophobia.

The Pakistani envoy also drew attention to the OIC’s call to designate an international day to combat Islamophobia.

Peace and development, he said, is the best pathway to the promotion of human rights.
“The outstanding example of this is the success of China, under the Communist Party of China, which is celebrating its 100th anniversary this year, in lifting a billion people out of poverty in 35 years and transforming the country into the world’s second largest economy.,” Ambassador Akram said, while highlighting Prime Minister Khan’s words that “China’s experience can be a source of guidance for all developing countries.