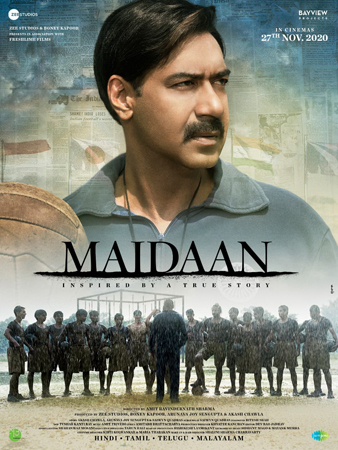 Bollywood actor Ajay Devgn’s upcoming film ‘Maidaan’ is locked for a June 3, 2022 release. The film is inspired by the true story of Indian football coach Syed Abdul Rahim, who coached and managed the national team from 1950 till his death in 1963, and is considered by many as the man who changed the face of modern Indian football. Directed by Amit Ravindernath Sharma, the film also stars Priyamani, Gajraj Rao and Rudranil Ghosh, ‘Maidaan’ is expected to release in Hindi, Tamil, Telugu and Malayalam. Produced by Zee Studios, Boney Kapoor, Akash Chawla, and Arunava Joy Sengupta, screenplay and dialogues are written by Saiwyn Quadras and Ritesh Shah. respectively.