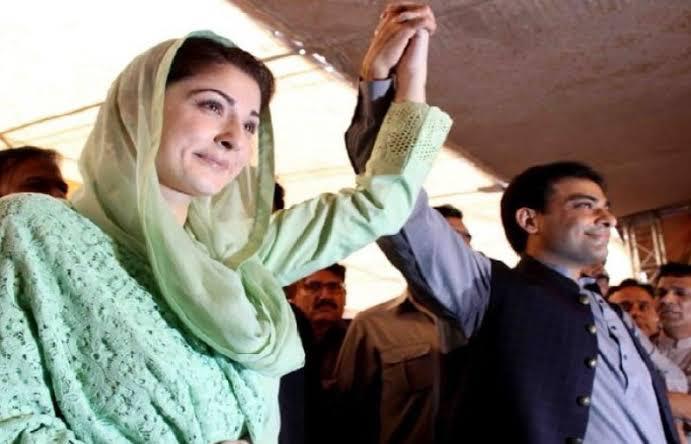 PML-N’s esteemed scions have once again decided to leave the fighting for another day. Picture-perfect reels of just as ambitious cousins are making rounds all over as family ties seem stronger than ever before. But no matter how sincere PML-N Vice President, Maryam Nawaz, maybe in her love for “her younger brother,” Punjab Opposition Leader, Hamza Shehbaz, it would be a hard job to paper the already-widened cracks. Only last week, the tightly-knit duo was standing eyeball-to-eyeball over the issue of extension voting. A true advocate of firebrand politics, Maryam trod a dangerous path by claiming nothing to do with the “sin” of supporting an extension for Army Chief General Qamar Bajwa. Responding in a manner befitting a seasoned politico, Hamza owned the decision as one by the party leadership. And then they wonder who’s been driving Lahori Lions to their early grave!
The latest instalment of this inter-party discord has come only days after an otherwise cautious Shehbaz Sharif laid bare the factionalism prevalent by floating the idea of a national government. Bewildered by doors fast closed around, the party’s spokesperson was left with no other option but to draw the “personal opinion” wildcard.
The citadel of Jatiumra is wasting away, much, much faster than anyone had ever expected. There were times when Senior Sharif used to take the most brazen line possible, fully aware that he could count on his deputy, come what may. But loyalties–however powerful–can only last so long!
The Maryam camp is steadfastly holding on to the unity banner. Party workers are routinely reminded that Nawaz Sharif and Shahbaz Sharif “are one.” One may wonder whether this assurance is for others or those mounting the barricades from within.
Hamza Shehbaz, however, has probably had enough of playing second fiddle. Letting go of the crown he was trained all his life for is a tough row to hoe.
The chronicles of Maryam and her defacto supremity are yet another irritant. Ever since the PDM movement landed her on centre-stage, she refuses to let go of her patronising sting. And the brigade of yes-men she surrounder herself with is making sure she remains just as confident in her personification of her father’s mandate! Hamza may not know what to make of her public charm but is au fait when it comes to the politicking handbook. Ergo, the determined fight to take the party by its horns, paint it in the militablishment colours and get it across the upcoming elections (with a golden star)!
With Nawaz not ready to take a back seat (frequent video addresses in organisational meetings) as key leaders are left to fend for themselves, a counterproductive tussle was bound to be the order of the day. He still believes in fighting the same crusade he had unleashed upon the establishment a year earlier. To his misfortune, those around him can sense his outcastness even if he chooses to keep his head buried. Meanwhile, Shehbaz is trying his utmost best to stitch a deal with powers-that-be. Far more predictable and moderate in his rhetoric, the adept statesman has the administrative flair to further woo the old guard. It is, thus, quite surprising to see his reconciliation mantra falling on deaf ears. The whys and hows of his underperformance notwithstanding, the debate over whose narrative is dictating the official party policy is getting eerier by the day. Hammering out the differences is no longer a viable strategy because it is not just a quasi-harmless tension anymore. The stronghold of PML-N is now entrapped in a messy quagmire that threatens to swallow it up. Popular they may be (thank you, Maryam), but popularity and power do not always go hand-in-hand. At least, not in the land of the pure.