* We are here as part of a three-day guided tour of Lake District, exploring the region in a swish minibus and basing ourselves in Keswick 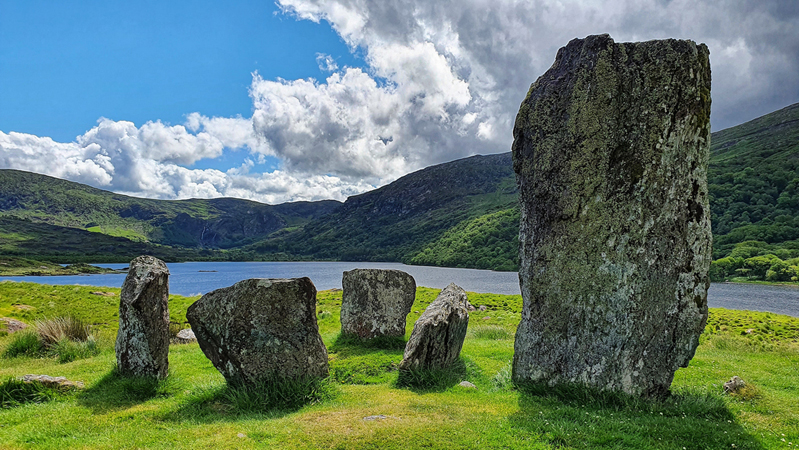 The sheep grazing around Castlerigg Stone Circle may not be even slightly curious about its history, nor awed by its ambience.

However, they make their contribution by keeping the grass tidy – and their benign presence adds to the peaceful aura.

We are here as part of a three-day guided tour of the Lake District, exploring the region in a swish minibus and basing ourselves in Keswick.

We comprise four solo visitors and, as a small group, we can be flexible with the itinerary, lingering longer where we wish.

No sense of being on a school trip, briskly moved along ticking off sights.

We have already investigated paths through quiet woods on the way to Aira Force, a hypnotically comforting waterfall that inspired the poet William Wordsworth.

It’s a contemplative place, unless you’re one of the many ecstatic dogs we see splashing happily in pools. Will we humans ever enjoy a stroll as much as dogs do?

We take our time at the stone circle. It’s one of the earliest in Britain, ‘raised’ in 3000 BC, pre-dating Stonehenge, and consists of 38 to 40 stones.

Our guide, Roger, tells us that stone axes were excavated from the site. No one is quite sure why they were put there, although he believes they may have been coming-of-age gifts for boys.

The stones face Thirlmere Valley and are surrounded by mountains including the towering Skiddaw and Blencathra to the north. It makes the circle feel protected and safe.

No one is certain what its purpose originally was – from astrological to religious – but we are using it for social reasons. Like other visitors, we are sitting on the stones and admiring the views while chatting.

Roger recalls his childhood holidays climbing these same hills. His parents told him if he got lost he should always ‘walk downhill’ – sooner or later he would come to a village.

Back on the road to Keswick, our minibus passes rolling fields of snooker-baize green full of Herdwick sheep – so hardy they have been known to survive a month in a snow drift – before making a stop at Bassenthwaite Lake.

Here, we traipse down to the water’s edge and gaze across. Slowly but surely, we are all transported by the total beauty and stillness of this four-mile-long, narrow body of inky-black water.

Less well known and less popular than Windermere, there are no boats on the shingle shore. It is almost deserted apart from one man and his Labrador.

I ask him if he has swum in the lake. ‘Not deliberately,’ he replies, ‘but I fell off my paddleboard earlier’, motioning to a recently deflated vessel. To our left is a woman folding clothes, attaching a neon marker buoy to herself, adjusting her hat and goggles, before walking into the water without a second’s hesitation.

It’s noticeable that there is no lifeguard, no angry sign in capitals forbidding swimming, no markers in the water to delineate which parts you can access.

Visitors simply park by the roadside and swim at their own risk. We watch the silent, still lake as the daylight fades, and as we return to the bus we have one unanimous request for an addition to the itinerary: ‘We really want to swim!’

We are staying in B&Bs dotted about Keswick. This is a fine market town, although the pandemic has taken its toll: plenty of restaurants have closed, while there’s a staff shortage during a staycation boom.

All of which means that wandering from the street and expecting a table for dinner does not work.

One apologetic manager of a hotel restaurant tells me that even he and his wife often can’t secure a table where he works. I meet a cheery couple queuing for takeaway fish and chips who have been unable to book anywhere either.

I finally locate a cheap and cheerful tapas bar off the main square. It’s imperative at most places to book tables weeks in advance.

Or take a tip from the hotel manager, who says he often takes a picnic down to Derwentwater instead. If you time it right, you can watch the sunset before tucking in.

This tour is an ideal introduction to the Lakes. We cover the ‘classics’ such as England’s largest lake, Windermere.

For a small extra charge, we take a boat trip because, as one of my fellow bus-mates notes: ‘We would be doing ourselves a disservice if we came to the Lakes and didn’t actually go on the lakes.’

We visit Grasmere, where there is a good-natured queue for the Grasmere Gingerbread Shop to sample treats baked to the recipe Victorian cook Sarah Nelson invented in 1854 in her Church Cottage – which seems almost as famous as Wordsworth’s grave in the village.

Hawkshead, where Wordsworth attended school, is a must-see. Roger gives us an entertaining potted history of the poet.

So we arrive in the village knowing he was the only poet laureate never to have composed a poem while in post, and that to celebrate Nelson’s victory at Trafalgar in 1805 he held a party on a mountain that was so riotous, his inebriated guests had to be tied on to their pack horses for their safe return.

Wordsworth’s sister, Dorothy, had a lyrical gift of her own; it’s said that Wordsworth not only read her diary but copied her words and passed them off as his own.

The village is a delight of small, whitewashed houses, traffic-free lanes, cobbled streets, and a square that seems to demand that you sit down with a drink and watch the world go by. The highlight is a surprise encounter when I try the door of the school. It is locked but the curator, Terry, hears the doorknob rattle and invites me in.

I am swept up with his enthusiasm as he shows me the framed royal warrant signed by Elizabeth I on April 10, 1585, inked with a feather quill, which gave permission for the archbishop to open a free grammar school, and the desk where Wordsworth carved his name with a penknife.

We’re never far from water throughout our tour, though it is easy to forget that the mountains and fells are just as mesmerising.

Fell running was invented here, as was the less popular Cumberland wrestling in which, Roger says, ‘two men hug, and try to kick each other’s legs out, wearing a onesie, with pants on the outside’, festooned with tassels and embroidered names of loved ones. This is, surely, crying out to become a late-night, televised sport.

The highlight is back at Bassenthwaite. We change into costumes and make our way over the pebbles into the still water. The lake is fresh but not so cold (as it’s never deeper than 70 ft) and it is electrifying in its beauty. The only ripples come from my strokes. It’s the best swim I’ve ever had.